Phil Gyford must be at the top of this list, for his endless help.

I knew nothing of websites when I started, and only know a little bit more now. So it is entirely because of Phil solving my innumerable problems, over a long period of time, that you can see the website today. He must often have regretted getting involved. But then it was all his idea !

And of course the computer itself always presented its own problems, independently of the website. For solving those problems and calming me down, I owe many thanks to Sue Gyford from Edinburgh, and to Nick Smith from Wickham Bishops (www.pccareessex.co.uk), both with a very patient way of helping.

When I became involved in Witham, in the late 1960s, there were a number of knowledgeable and dedicated people already studying Witham’s history

One of them was the late Maurice Smith, who carried out research in the Essex Record Office for very many  years. No-one had previously done such pioneering and painstaking work on Witham. Starting in 1970, he produced a series of Witham booklets on different subjects; the first one is 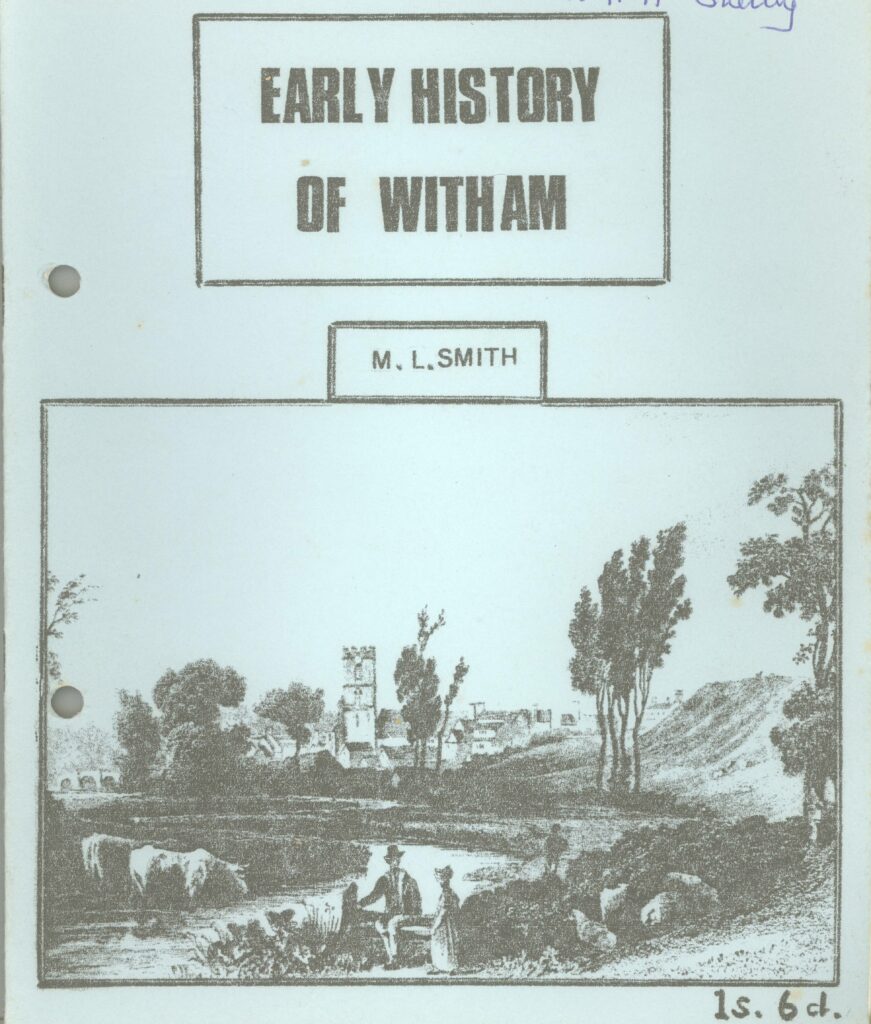 illustrated here. He compiled some larger volumes of research, and also wrote articles for  Essex Countryside. Like everyone else in those days, he used a manual typewriter. And at the ERO, he copied everything by pencil, like the rest of us. No taking photos of documents, and not many microfiches to get prints from.

Maurice also took photos of Witham and collected old ones. Many of the latter might never have been known otherwise, but are now familiar. All of his collections are now in Witham Library and the Essex Record Office, and possibly Howbridge School. In the end, Maurice moved to Bournemouth, so was  less well-known to later generations than he deserved.

The Witham Archaeological Research Group were working at the same time as Maurice, in the 1960s and ’70s. They carried out one of the early investigations of the Romano British site at Ivy Chimneys in Hatfield Road – a lovely way to spend a Sunday afternoon. 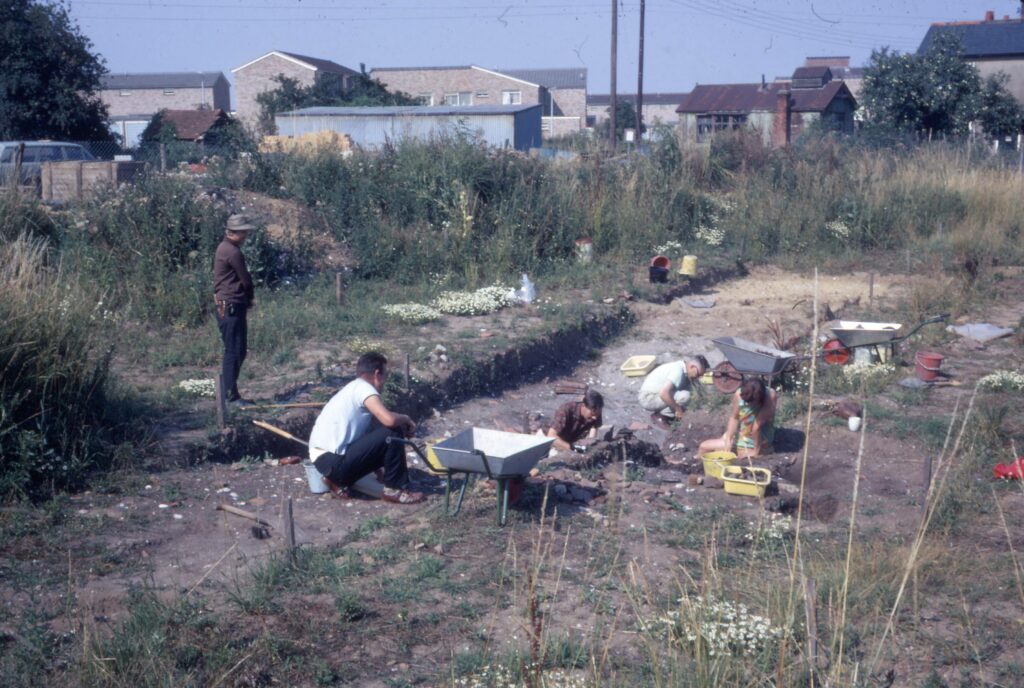 I was a member when the group also began to survey old Witham buildings. These were stirring times in the study of timber-framed buildings. Cecil Hewitt of Essex had recently established a new way of dating them, using his own experience of carpentry. It was based especially on the joints connecting the timbers. He showed that many buildings were much older than previously thought (notably the barns at Cressing Temple, whose estimated date was revised from the 16th century back to the 1200s.)

We in WARG were very fortunate that one of our members was Mike Wadhams. He was a friend and colleague of Cecil Hewitt, and so had a good knowledge of these “new” methods. Mike, together with Betty Loring, led the group’s work on Witham buildings in the light of Cecil’s research. The reports  are in the Essex Record Office with reference T/P 198. It was great to share the experience and enjoyment of these friendly people.

But I never really understood building construction myself. So in 1967 I was taken by Harry Loring on my first ever visit to the Essex Record Office, to look at the relevant documents. It was nowhere near as easy as it sounds. I remember that there was some dissent between the Group and Maurice Smith about the history of one building. He dated it from the documents and the Group dated it from the timbers and the joints, and they came to different conclusions. But tricky though it was, it started me off.

At about the same time, I first encountered the inspirational Arthur Brown. One dictionary defines inspiration as “a feeling of enthusiasm you get from someone or something, which gives you new and creative ideas”. That was Arthur. 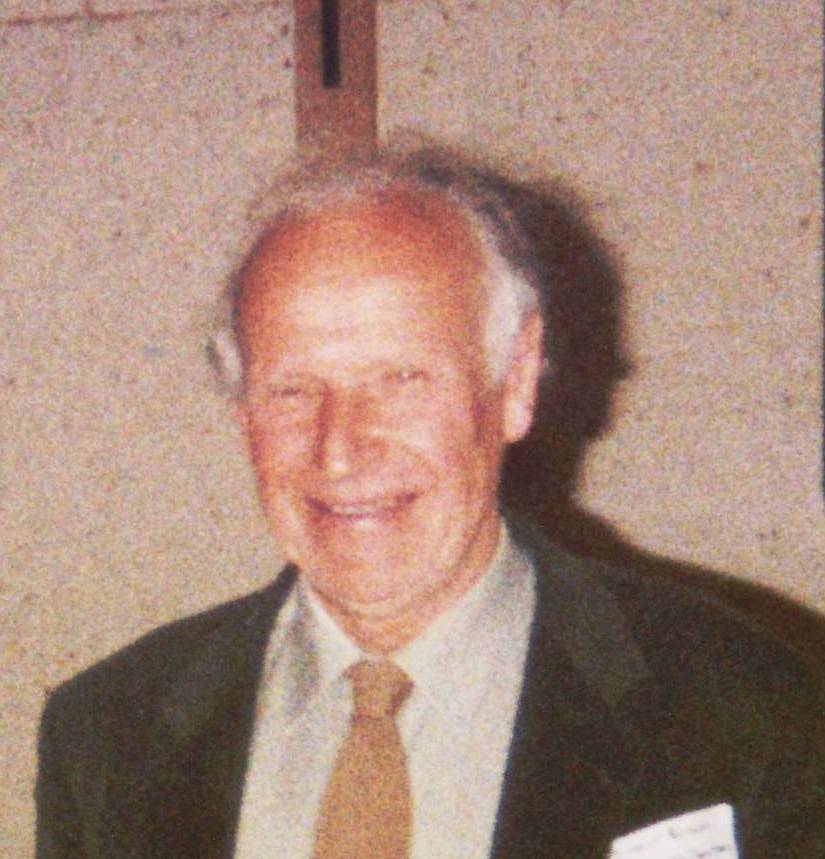 With his tall figure, his friendly smile, and his musical but deep voice, he travelled all over the northern part of Essex with his WEA local history lectures, leaving his students inspired to do more. The WEA is the Workers Education Association. The Essex WEA was fortunate to have Arthur as its forceful and busy chairman for many years. His wife Pat was its secretary for a long time – she appears in some of my illustrations, including the next one.

Below: a postcard from Arthur in 1978. With typical encouragement and some very good news ! 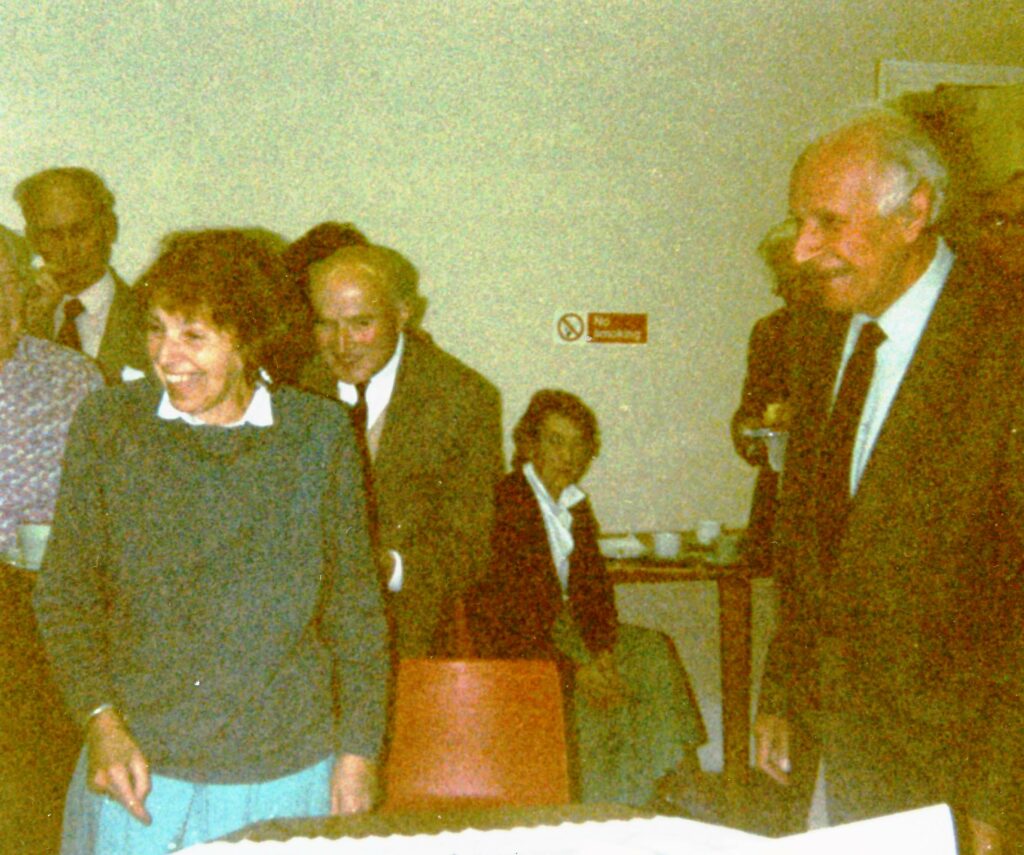 Above: the celebration of Arthur’s fiftieth year in the W.E.A., in 1989. Pat and Arthur in the foreground.

Arthur’s part of Essex WEA must have contained two hundred or more parishes. And yet when he visited any one of them, however remote, he would use his own notes about the place’s history. These would often be far superior to the notes compiled by us locals, even though we only had one parish to study. As a teacher and a friend, he shared this hard-won information, and his experience, with great generosity.

Although to many of us it was his local history that inspired us, I mustn’t forget that Arthur was first of all a Classics teacher and never left that behind: I remember a grand talk about Athens called “The Tiler on the Roof”. For the “younger” generation, he’ll be remembered for yet another post which he took up in his retirement. This was his lectureship in Local History at the University of Essex, to which he had received a well-deserved invitation from the History Department.

During all these posts, Arthur wrote books, mostly about the farmworkers and the poorer residents of Essex. They were all based on his own research, and so they were entirely pioneering. Very readable and very helpful in every way, and really, how did he find the time?

I can remember during the 90s that Arthur was becoming sad that he couldn’t quite maintain his former pace, though he still seemed to be doing well. He died in 2003 – can it really have been so long ago. In a way I’ve been glad to have this chance to write about him. But it  has made me realise how very much I still miss him.

One account of his life, elegantly written by Andrew Phillips, is at https://www.theguardian.com/news/2003/jun/04/guardianobituaries.obituaries

And the following book is by his friends and colleagues:
Essex Harvest: a Collection of Essays in Memory of Arthur Brown (Essex Record publication, 2003)

Then there was Albert Poulter. I don’t really know when Albert took up history so seriously. But he was born in Witham in 1907, so he had a head start on the rest of us. For various reasons, including his poor health, his relative youth and possibly  personal differences, he didn’t follow any of the Poulter family’s trades. His father was a “jobmaster” who hired out horses and horse-drawn vehicles, two of his brothers were shoemenders, and market gardening also played a part. 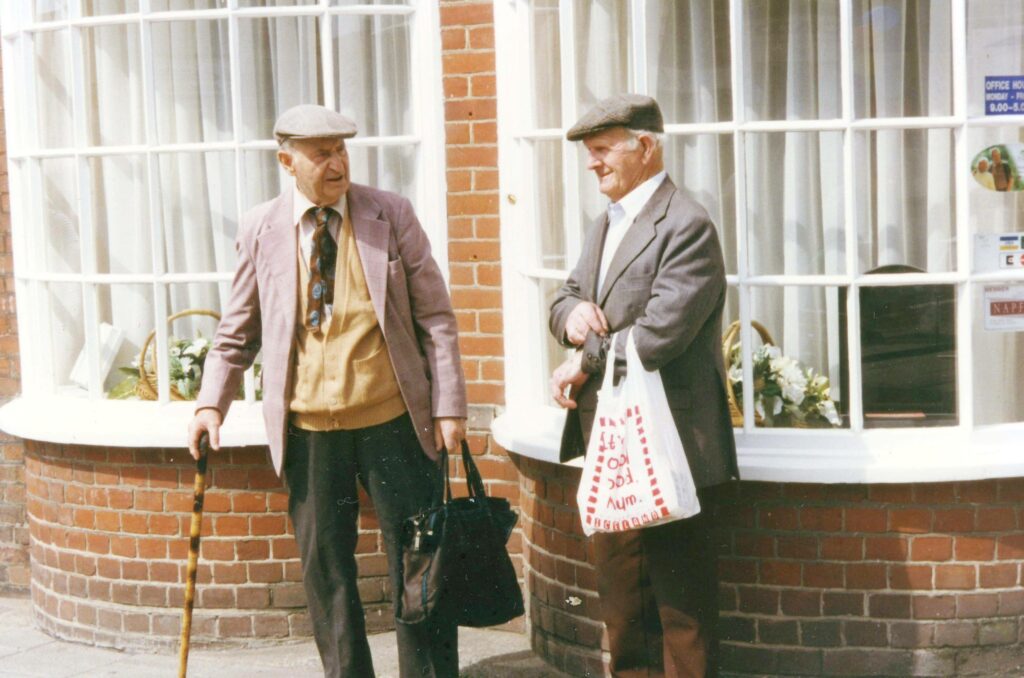 Albert on the left talking to Arthur Bones of Blunts Hall Road, a former cowman. This was during the Mayfest in 1997 in Newland Street – a good place and a good event for a chat.

Sometimes Albert had white-collar jobs; his first was at F H Bright, solicitors, where someone introduced him to the art of stamp collecting. So he was well prepared for writing and producing booklets like his “In the Yards, Up and down the Steps: Characters of Bridge Street and Newland Street, Witham”, published in 1996. It is  full of stories about those characters.

As well as writing, Albert loved talking, as shown in the photo. Much of his knowledge of Witham was passed around the town by word-of-mouth. By the same means, he heard new stories from the people he met on the way.

Witham History Group
The History Group was launched on 3rd July 1989, when a small gathering of people met at the Witham Mill House.  They had been invited by Scotsman Bill McCulloch, with a view to forming a group to study the history of Witham. Albert Poulter was there, and so was I. The plan was, that members would take turns at presenting subjects which they had investigated beforehand and which everyone could discuss. This  format was followed for several years, until the number of members became too great for such an informal approach. Nowadays we usually have outside speakers. But there are also opportunities to chat to others, particularly about our shared interest in the history of Witham. It is fitting that Sheila Bates is now one of the Secretaries; she’s the daughter of Bill McCulloch, the founder. The other Secretary is the hard-working Brian Simpson, a Witham man who is making his own collection of historical information, and in particular is working on the amazing diary kept by Dr Henry Dixon in the 19th century. You may come across some references to him in this website.

I am including these two photos for old time’s sake. Many of the people in them are no longer with us but I think it is good to remember them, ten years after the group started. They were a friendly and very well-informed crowd, many of them from Witham. The photos were taken by the late Lester Shelley, who came to talk to us in January 1999, and liked to photograph his audience. He was part of an old Witham family who had many talents, including market gardening, shopkeeping, haulage and house clearance. They had a wonderful Aladdin’s cave in some sheds off Mill Lane, behind the Crotchet. There they sold on Saturdays what they had collected during the weeks before.

Lester collected and kept most of the treasures which had Witham inscribed on them, and those were what he was showing us when he came to the History Group and took these photos. 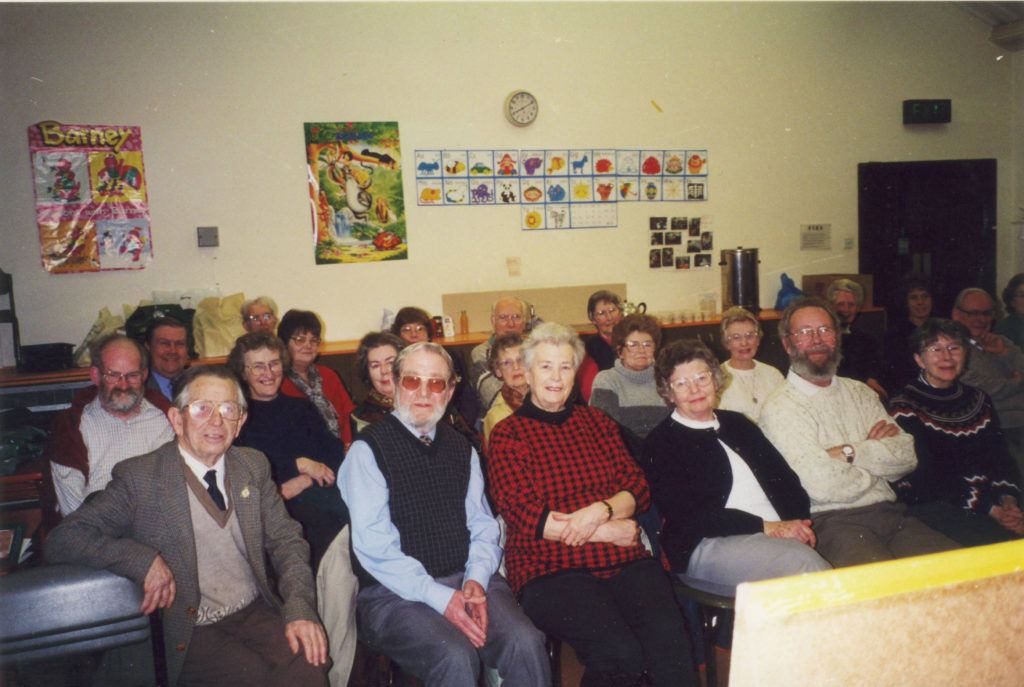 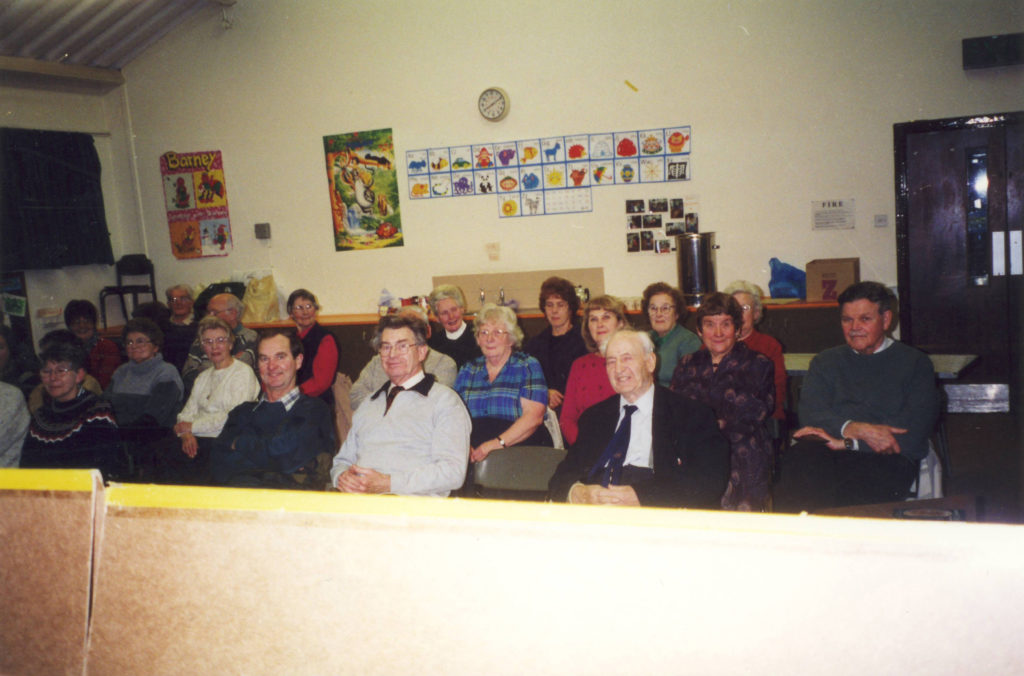 Very many other people have contributed
their knowledge and experience to all parts of this
website, for which I am tremendously grateful. In particular, many talked to me about their memories (for which see the Interviews category) and very many allowed me to copy their precious photos (see Photos). I’ve done my best to mention those people as I’ve gone along, and apologise if anyone has been omitted.