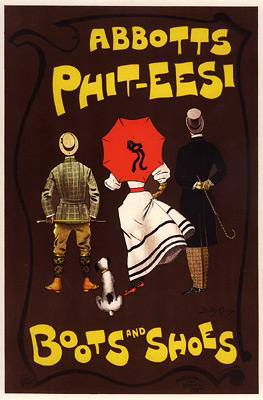 Advert for Abbotts Phit-eesi boots and shoes. Abbotts was a London firm founded in Clerkenwell by Walter Abbott c.1864. He was born in Witham, son of David Abbott, bootmaker of Chipping Hill. The firm continued as Abbotts and Sons and by 1937 had about 60 shops, most in central London but others in the provinces and Paris. They were bought by K shoes and Clarks in 1937. K kept the Abbotts name for their shops for a while, whilst Clarks named theirs Peter Lord. The advert was painted by English artist Dudley Hardy and printed in Paris.