Ginkgo Biloba trees are my favourite trees in Witham. I know of only four old ones (it was only  three when I first wrote this article in 2014). One is near the top right of the Newlands car park, one in the garden of Collingwood House in Collingwood Road, one at the War Memorial, and one  on the Grove Road (near the traffic lights on Newland Street). They are known for the startling bright yellow of their leaves in the autumn, as shown in my photos. If the leaves have already fallen, that gives you the opportunity to look down and admire them. They all, large and small, have an unmistakeable fan shape. These leaves can stay on the ground for several months.

Some of the four Witham Gingko trees may be more than a hundred years old. It would have taken  special dedication to obtain a tree then. Not just a few clicks on a plant nursery’s website. What is amazing is, that both old and new Gingkos can be described as “the oldest living trees”. They are found in fossilised form in Asia.  Those fossils show that the Gingko tree is over 250 million years old. During that time, they survived the extinction of the dinosaurs 65 million years ago, when three quarters of plants and animals were destroyed. The Gingko trees in Britain were described as a “living fossil”, by Charles Darwin. For about the last three million years, the only ones living in the wild have been in China.

But in 1762 some seeds were brought from China to Kew Gardens. Soon Gingko Bilobas were being planted in high class gardens all over Britain.

Above is a photo of one of the two Gingko Bilobas in the former garden of Edward Charles Smith. It must have cost a lot to buy, transport and maintain a Gingko tree in his time. But he had two flourishing shops, with gardens. which he inherited from his father, Edward, in 1864. We can see from the drawing below that they were the sort of shop where customers arrived by horse and carriage (the place in the drawing probably became 42 Newland Street, later Spurge’s, and his other one was later 74-76). The drawing below is from a paper bag; Maurice Smith kindly gave me a copy. 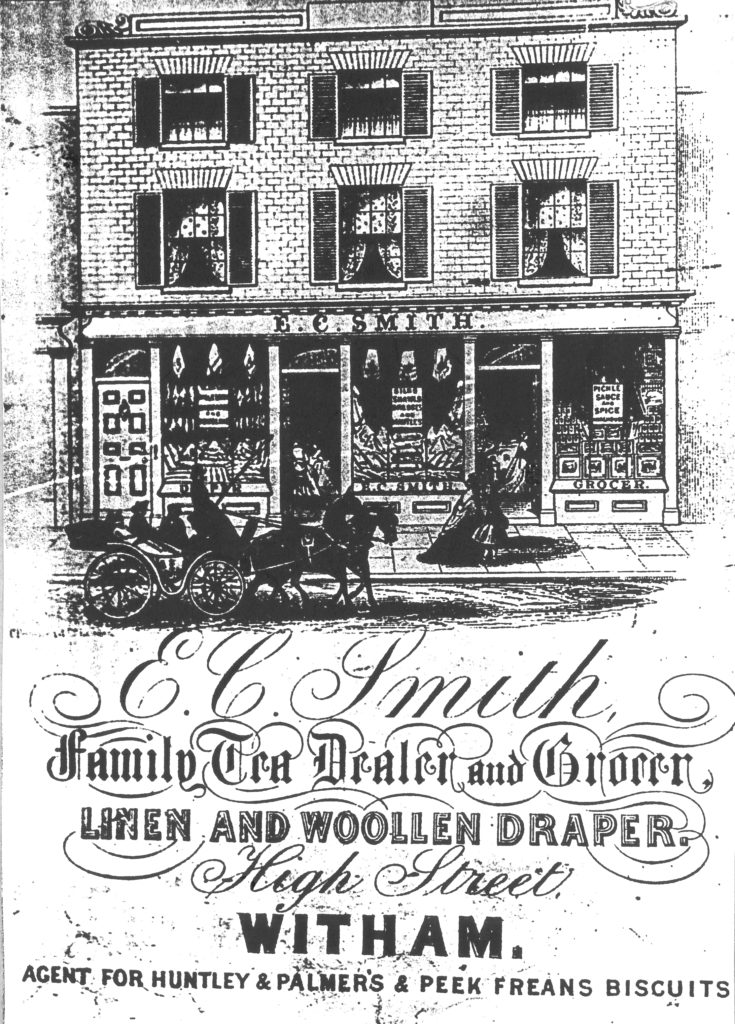 Edward Charles extended the garden, and also built and sold a number of houses. In 1867 he put a stone in his brick wall with his name on it. It is still there, at the back of the car park. It 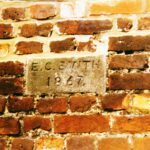 may have co-incided with the building of the wall itself.  Sometimes such bricks were just placed for display, but at other times they are evidence of disagreements about boundaries. Some examples even say “This wall belongs to ……”. The nearby Collingwood Road was built in 1869, through fields, so the necessary re-arrangements of property may have been difficult.

In about 1880, Edward Charles Smith had a grand new “Family House” built in his grounds. It was Collingwood House (now Noel Pelly House, 15 Collingwood Road). His old large garden, including the tall Gingko described above and the brick wall, then became the garden of the new house instead. And close to the house, we find a second, smaller surviving Gingko. So perhaps this one was not planted till the house was built, in which case we could date it to the 1880s. Edward Charles died in 1889. 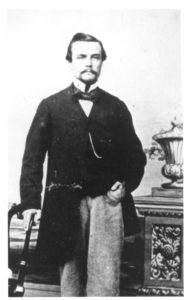 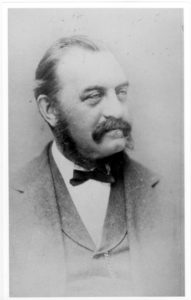 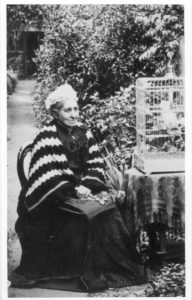 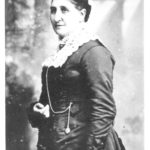 Edward Charles Smith and his wife Mary Keningale Smith. Photos in middle age and in later life. He died in 1889. They had no children.

Mary went to live in one of the three new, large, expensive and modern Medina Villas (now 80 Newland Street; see https://www.janetgyford.com/articles/54-medina-villas/). She lived there for over twenty years and died in 1914.

We have other circumstantial evidence that it was Edward Charles who planted these two Ginkgo Bilobas,  and no doubt many other interesting trees. For instance, when he died in 1889, the newspaper said that “His love of flowers and garden scenery was conspicuous”, and that he loved to show his garden to visitors.

The estate agent selling the house and garden and Edward Charles’ many other properties, was perhaps not a specialist gardener. But his description did include “tastefully arranged grounds”, “foliage, trees and shrubs”, the  “Ornamental Fountain and Fish tank” and the “Octagon Summer House”, though I think his main interests were the proximity to the railway station and items like the “noble marble mantlepieces” (ERO Sale Cat.B354).

Mrs Marjorie Coleman, who lived there later, confirmed that Edward Charles had “filled the ground with lots of lovely shrubs and trees and fruit trees. And a lot of them were unusual ones.” Marjorie’s parents, Percy and Catherine Brown, bought the house and garden in about 1908. Percy was a corn dealer and farmer, and Catherine organised many social and charity activities.. Marjorie said that her parents “bought Collingwood House because my father was very keen on gardening. And they had about – quite two and a half acres.”

The Browns had two gardeners in charge, and the family “dared not even go and pull a cabbage without asking”. The house was nearly opposite the Public Hall, so that people “used to borrow plants to put along the front of the stage. And very often, some furniture!” Also they used the Browns’ kitchen for making sandwiches – it was much superior to the one at the Hall.

I’m digressing, though I do like that story. One more thing is to be said about those two Gingko Biloba trees of Edward Charles Smith. Which is that it is surprising they are still there, especially being so near the town centre. And we shall find the same later at the Grove.

But the next tree is behind the War Memorial, a position which may protect it. In 2014, I was looking at some of the names on the Memorial, which was first unveiled in November 1920 (just 100 years before I am writing this).  I saw a thick carpet of bright yellow leaves. And then I saw their fan shape – yes, another very tall Ginkgo Biloba tree, behind the War Memorial, to the left. How lovely. I haven’t found any mention of it from when the Memorial was first unveiled in 1920. The land was given by Percy Laurence of the Grove, so perhaps he gave the tree as well. Anyway, it was a special discovery for me, though I know that other people already knew about it.

An even more recent sighting for me was the Gingko tree on the road which leads from The Avenue to Maldon Road. Many people had spoken about it. It is near the traffic lights now, where that road crosses Newland Street. This area was originally  in the grounds of the mansion house at the Grove, which was truly enormous.

The Grove was first built in the 17th century and then enlarged from time to time. In 1768, the Earl of Abercorn lived there. Philip Morant wrote his History of Essex in that year, and reported that “the noble owners have improved it, with plantations of trees, and other decorations”. Later descriptions were along the same lines, though the most impressive, in 1883, was confined to the house itself, which had “18 Bed and dressing rooms … 3000 Vols of Books … a quantity of Greenhouse plants” (ERO Sale Cat.B5183).

Below is a leafy view of the Grove from before 1865 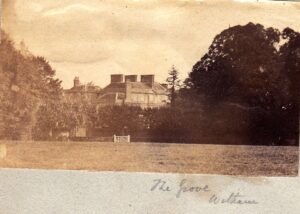 . Reverend Henry Du Cane lived there, and his grandson, Reverend Arthur Du Cane, was a keen photographer. This is one of his views of Witham, one of the earliest Witham photos in existence. It would be interesting if someone could go through all the various photos … END_OF_DOCUMENT_TOKEN_TO_BE_REPLACED

Trees seem to have been of declining interest at the Grove in the 20th century. The Demolition Sale of 1932 stressed the value of a broken-up brick mansion for building materials. And after that, it was a matter of dividing up the land and trying to sell it as building plots. Some of the outbuildings and stables were retained and converted into a house.

So what I am saying is, that it’s surprising that a Gingko tree has survived all these changes and disturbances. And the new road on which the Grove tree now stands, built in the 1970s, came perilously near to demolition.

The Grove’s Gingko is quite difficult to photograph, as it appears to be growing out of a large holly bush, and is surrounded by other trees. The first time I tried to get a picture, it was raining slightly, and that was the death of my phone – I should have known better. I must go back one day, but for the time being, that tree at the Grove has rather a low profile in my own records.

However, I’ve discovered that Mrs Winifred de Trense had talked about it when I interviewed her in London in 1991 (Interview 152). She became the manager of the Whitehall Cinema (now the library) in 1936, and she lived at the Grove during the early 1960s (i.e. the “new Grove” which had been the stables of the “old Grove”).

She said “I tell you what there was and that was a Gingko tree in the front. Is that still there? It had a County Council [sign?] on it saying it must not be cut down. It was interesting because when I first came to Witham, and people used to tell me what the town was like in the old days, and in the last century, I think somebody had gone abroad, an explorer had gone abroad and brought back four very rare trees. Which were scattered all over Witham.”

“And when I got to the Grove of course I found the Grove was one of the places. I was really fascinated after hearing about these trees to find there was actually was one in the Grove.” She suggested that there might have been others at Roslyn House and Midland Bank House (16 and 57 Newland Street) but I’m not sure about those.

It’s possible that as you go about the town, you will be walking along, idly looking at the ground, and suddenly you’ll notice that the leaves are this really funny shape. And you’ve found another Ginkgo Biloba tree. Whose ancestors lived in the time of the dinosaurs. 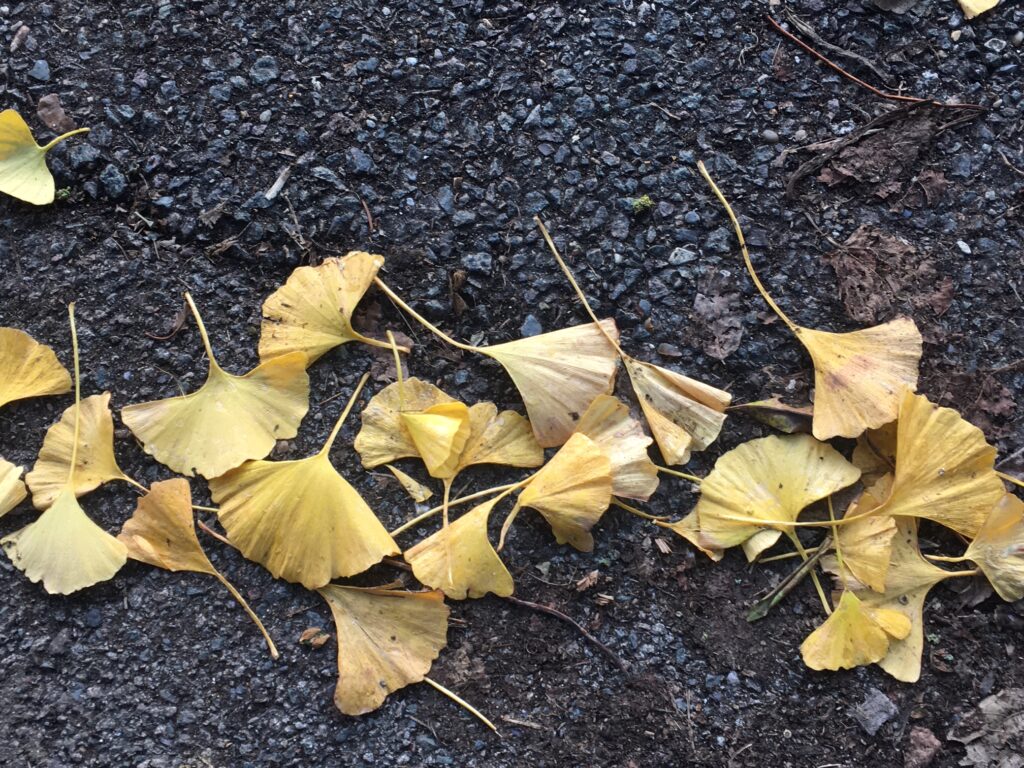 A version of this article appeared in the Braintree and Witham Times in November 2014, and a some additions were made in November 2020.