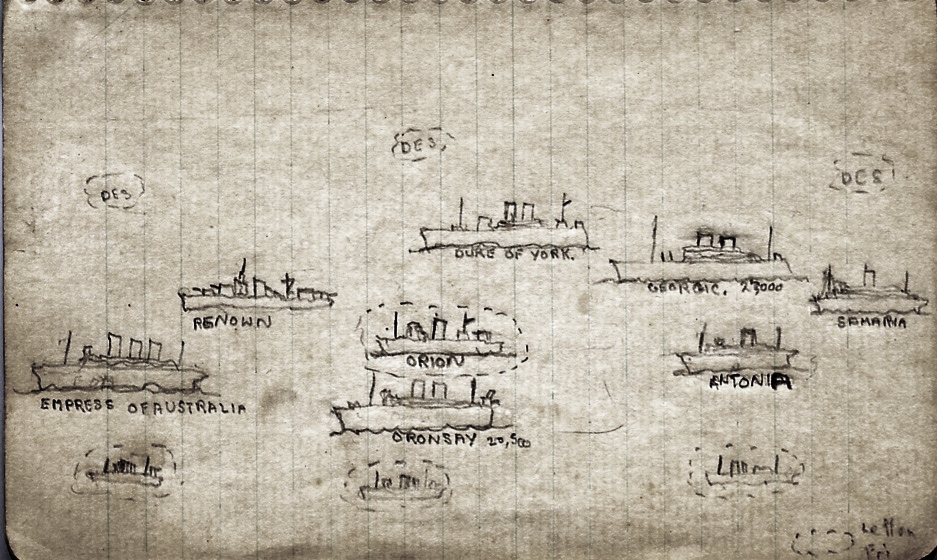 Second World War. Drawing by Fred Richardson of the convoy in which he was sailing for Canada as an evacuee. This was convoy ZA, with batches D5, D7 and D8 of the evacuees. Fred was on the ‘SS Oronsay’, and the other evacuee ships were the ‘SS Antonia’ and the ‘SS Duchess of York’ (named on Fred’s drawing, though he has the Duke of York. He also names the Renown, the Empress of Australia, the Orion, the Georgic, and the Samaria, probably liners which were also in the convoy. There are also six destroyers marked. He has dotted lines round the Orion and the destroyers, and a note that they ‘left on Fri’ (that would have been 16 Aug). Graham says that the book ‘The Absurd and the Brave’ indicated that the convoy destroyer escorts left part way through the voyage and also the ‘Orion’. According to Fred’s diary the convoy sailed 10 August and arrived in Halifax, Nova Scotia, on 19 August 1940 (the book says it arrived 21st, so the latter is wrong). Fred’s diary for 16 August says: ‘Had P.T. Destroyers left us after 2000 miles. Still had “Renown”. “Orion” also went East had troops on. “Empress of Australia” made zig-zag course’. According to http://www.maritimematters.com, the ‘Empress of Australia’, was started as the ‘Tirpiz’ in Germany in 1912, and then ceded to Britain after World War 1, completed with the funnels not evenly spaced, used as a liner, saved 3,000 lives during the Yokahama earthquake of 1923, served as a troop ship 1939-51, was scrapped 1952.