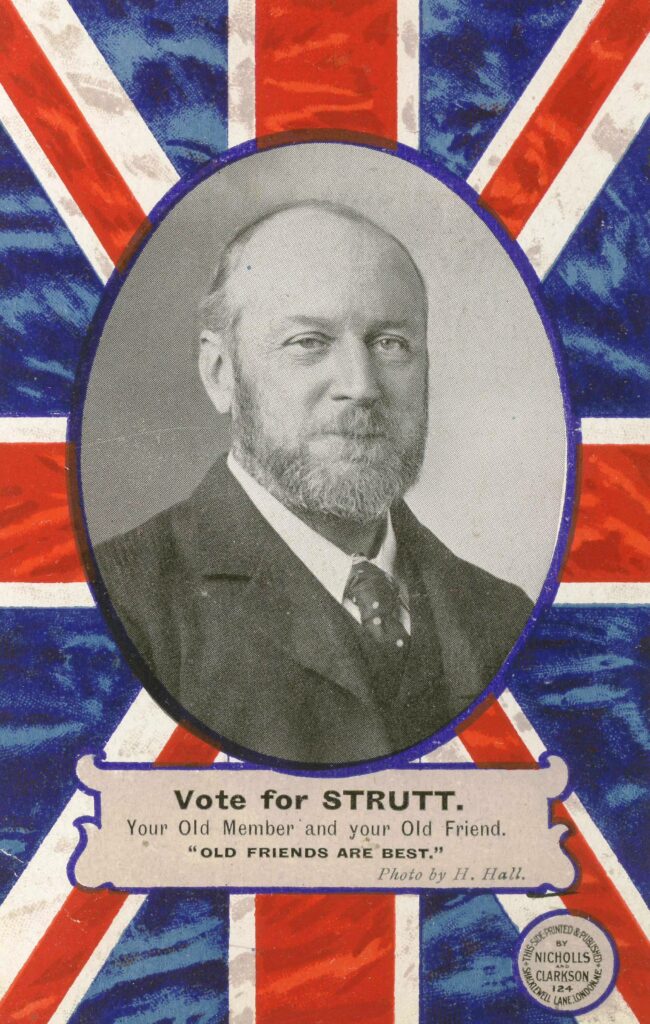 Postcard designed as an election address for the Hon Charles H Strutt. On the front is a head and shoulders photo of him, with the Union Jack as a background. The caption below the photo is ‘Vote for STRUTT. Your Old Member and your Old Friend. OLD FRIENDS ARE BEST. Photo by H Hall’. The medallion at the bottom right reads ‘THIS SIDE PRINTED AND PUBLISHED BY NICHOLLS AND CLARKSON, 124 SHACKLEWELL LANE, LONDON NE’.  On the back, printed in blue – “A motto old and hard to beat: An Essex Man for an Essex Seat”. ”VOTE FOR STRUTT Who is an Essex Man, Who lives amongst you, Who knows your interests. IS YOUR OLD MEMBER AND YOUR OLD FRIEND. VOTE FOR STRUTT. The Popular Candidate. VOTE FOR STRUTT The Working Man’s Friend. STRAIGHT AND TRUE”. Printed and Published by Shearcroft & Hawkes, Braintree’. Cut out of magazine ‘This England’, Summer 2005.
Charles Strutt had become the Conservative MP for eastern Essex in 1883 for 2 years Then the seat was divided, and he lost at Saffron Walden in 1885. Then he was MP for Maldon (including Witham) from 1895 to 1906, when he lost in the Liberal Landslide. The card is undated, so could be from any of those dates.