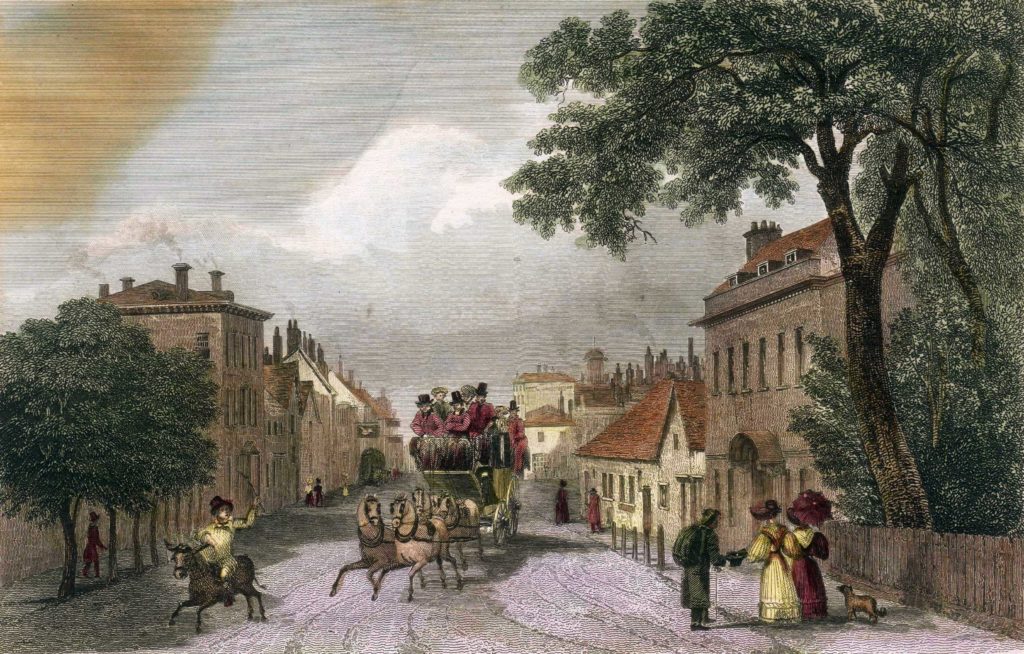 Engraving of top end of Newland Street, entitled ‘Witham, Essex’. ‘Drawn by G.B.Campion’ [George B Campion, 1796-1870, better known as a water colour painter, see DNB]. ‘Engraved by W.Watkins’. ‘Published by Geo. Virtue, 26 Ivy Lane, July 1, 1832’ [GV (c 1793-1868), publisher of good artists and engravers. Lots of books. Business ‘of prodigious extent’, during career issued over 20,000 copper and steel engravings. His son James Sprent Virtue (1829-92) continued. See DNB.]. Includes carriage and horses and donkey and rider. Includes on left side of the road, left to right, High House (now part of 5 Newland Street, then with three storeys, now with two), other buildings since demolished on site of 5 Newland Street, building now the Red Lion public house (7 Newland Street, probably then the Black Boy). On the right side of the road, left to right, probably Whitehall (one or both of the white buildings right of the coach, now 18 Newland Street, Witham library), 16 Newland Street (set back, long, now Roslyn House), row of single storey cottages (on site now occupied by 12 Newland Street, 10 Newland Street, 8 Newland Street and 6 Newland Street), and Avenue House (4 Newland Street). Note that the left hand and right hand sides of the roads are not in quite the correct relationship to each other. Large, stored in portfolio, not in album. Information on back when purchased said ‘this is an antique engraving printed in 1835 but the colouring is recent’.