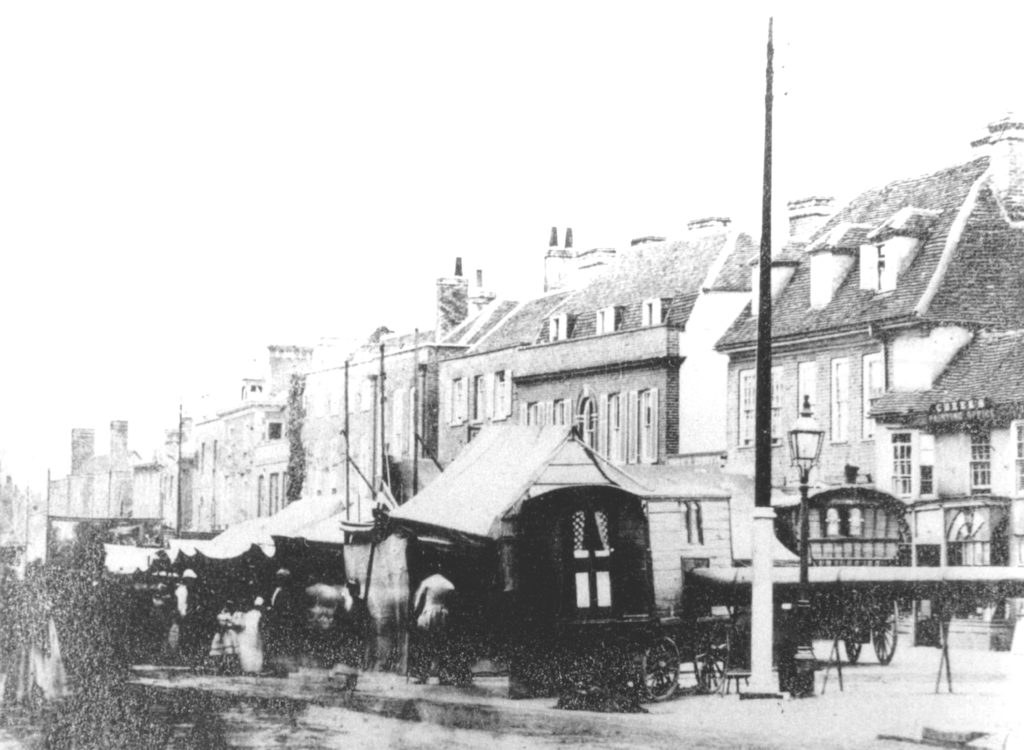 Fair in market place in Newland Street. In the background, left to right, 100 Newland Street (Batsford, with two tall chimneys), 96 Newland Street and 98 Newland Street (Christmas House, since replaced), 94 Newland Street (Lawn Cottage, small, with gable, built 1865 giving earliest date for photo), 92 Newland Street, 90 Newland Street (with clock in front of them), small gap for entrance to Congregational church, then the former Constitutional Club from which the clock projects, with the pointed tower with bell further back (burnt down 1910), 88 Newland Street (stone effect round windows, looks to be under clock), 86 Newland Street (lower, with high parapet), Medina Villa, large with poles in front and ivy on left hand end; demolished and rebuilt as Medina Villas (80 Newland Street and 82 Newland Street and 84 Newland Street) in 1883), 78 Newland Street (with shutters), 76 Newland Street and 74 Newland Street (with arched window in middle), 72 Newland Street (five windows, behind lamp post), part of 70 Newland Street (Cheek’s stationer’s and printer’s, whose name is on it; he was there in 1871 census but it was Day’s by 1874 directory). The newspaper report of 1931 which accompanies the copy at M1930, says ‘In the forefront of the picture can be seen a shooting gallery, the iron work tube used as a safety measure must have extended across the High Street end of Guithavon Street. To the right of this, but not shewn in the picture – in fact, exactly where the present telephone box stands – stood a greasy pole, which afforded much amusement for the youths of the day. The outside of a boxing booth shews up on the left of the picture. It is interesting to note that the telegraph pole carried but six insulators, also at that period only one message per wire was possible at the same moment. The successor to the telegraph pole of our picture now carries 92 insulators, while a number of messages can be transmitted simultaneously over one wire. The caravan race of people who attended Witham and similar fairs are now becoming extinct. … At the time our picture was taken there was in business in Witham a Mr Priddy, wine and spirit merchant. On the occasion of the annual fair he used to place barrels half-full of water, with apples floating on top, outside his shop. Schoolboys and youths created much fun in their efforts to extract the apples with their hands tied behind them. The local Council might consider obtaining the original of our picture, having an enlargement made, and hanging the picture in their Council Chamber. It is a link in the history of Witham. At night the booths were illuminated by naphtha flares. Cakes and gingerbread found ready purchasers. Itinerant pedlars disposed of their wares. As the evening wore on the public houses became full. Ribald jests and rough horseplay were the order of the day. The boxing booth proprietor had no need to put his own staff on the platform. there were plenty of aspirants to put on the gloves with each other. The then inhabitants of Witham were probably not sorry when fairs disappeared from the High Street.’