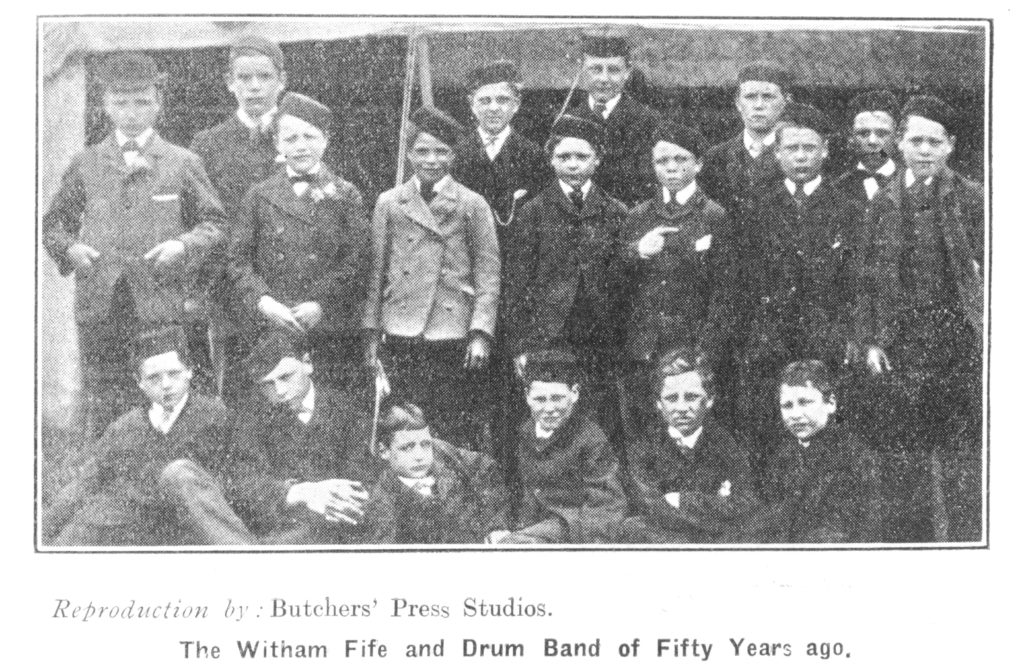 The newspaper caption is ‘Witham Fife and Drum band of fifty years ago’. Says it was founded 50 years previously (so c 1882) by Mr [William] Bindon Blood so was known as ‘Mr Blood’s band’. It was intended to keep the lads out of mischief. Mr Blood got the instruments. One of earliest conductors was A M Mead who played the drum. Mr Mortimer, clerk in Mr Blood’s office, taught the fife. Mr Blood provided the room (the premises were occupied by the Witham Co-op in 1932). At that time there were two sports meetings a year, on Bank Holidays, and the fife and drum band performed at them. Also there was a cycling club, the Eagle Cycling Club based at the Spread Eagle. The Band went to the cycle races in the Park. There were generally 28 performers. Mr Brewster, the harness maker, gave the information to the newspaper. The photo was taken in the Park, probably on Oak Apple Day. Standing left to right are ‘A Amos, W Smith, G Pearce, E Smith, Harry Ward, W Amos, George Cutter, W Rice, Tom Harvey, W Hubbard, C Roberts, F Rutledge. Sitting left to right, A Barker, F Brown, E A Brewster, J Martin, J Rudkin, W Rudkin’. Boys in caps. Five of them still survived in 1932.