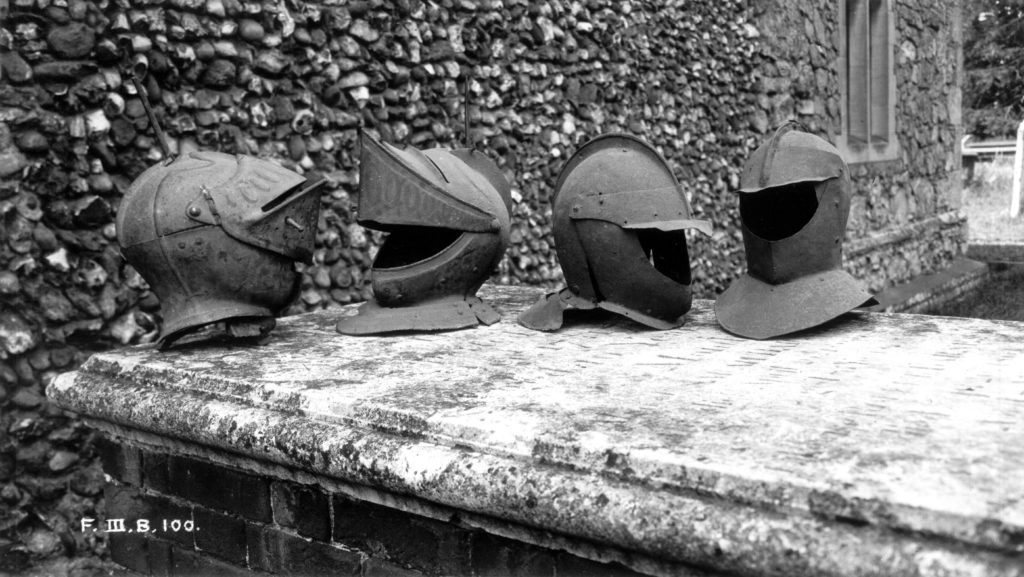 Four armets (helmets) (armets) from the parish church, displayed outside on a tombstone in 1914. It is said that the choir-boys used to play with them at that time; in due course they were put on high brackets (the armets, that is).

In 1921 Victor Farquharson Major, was working for the Royal Commission on Historic Monuments. He took photographs of these helmets into his club, the Naval and Military, and wrote descriptions of them, from left to right. These are now included in the Royal Commission’s handwritten inventory, derived from a countrywide survey carried out in 1914-21.

Here are very brief extracts from his writing.
1.“Armet, c.1480 to 1490. Appears from the Photograph to be in perfect condition and complete”. “This Armet may be considered a very fine piece” [later estimates of the date make it 1510]
2. “Close Helmet 1570 to 1580. The helmet is a good one of its class”.
3. “Trooper’s Helmet c 1620. This seems real but of very poor design and is of the latest sort of headpiece worn”.
4. “This looks like a funeral dummy … and not intended to have been worn”.

Number one, which was of the highest quality and by far the most valuable, had a chequered history during the 20th century, as described more fully with photo M318, and is now in the War Galleries in Leeds.

The other three are still in the Church, having been briefly stolen from an exhibition in Colchester in the 1960s.