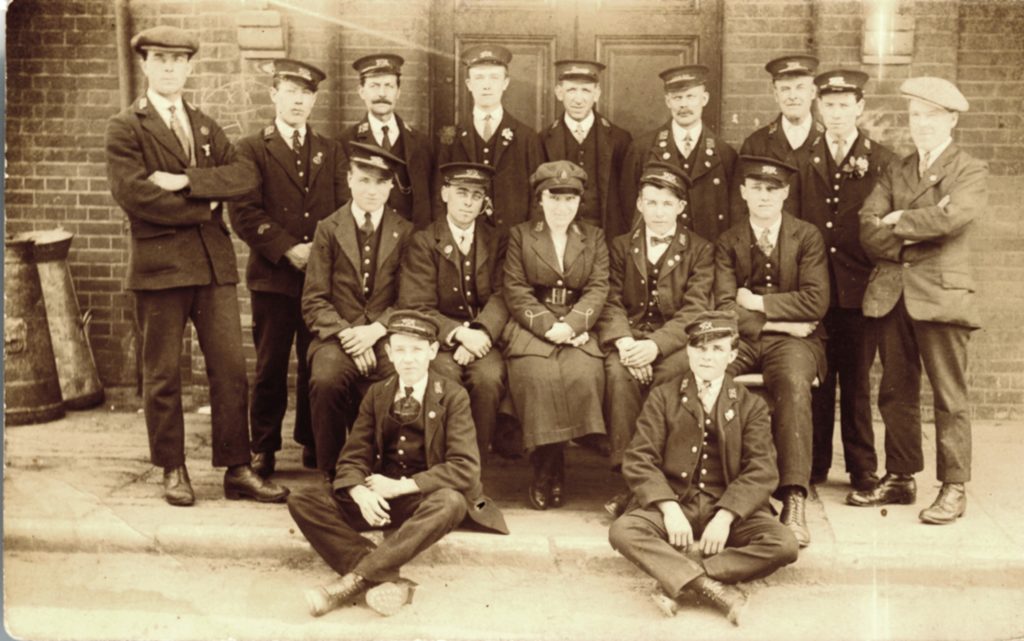 Group of railway workers, probably outside Witham railway station. The names are given on the back. Further information about them came from John Newman (who was at the booking office November 1945 to May 1957, then went to Shenfield) and from an undated newspaper cutting in his possession which has the photo and some text, probably sent in by Charlie Smith. JN says it was a group of platform staff and shunters but probably not all of those there.
Back row, left to right, Alf Griggs (porter, was leading parcels porter in JN’s time) , Albert Bright (known as Sam, shunter), Arthur Chalk (ticket collector, injured in the crash of the Cromer express, 1905, had moved to Chelmsford by 1945), Fred Gibson (given wrongly as Gibbons on the photo, shunter, lived at Motts Lane crossing), George Rush (foreman porter, JN heard tales about his having goats and sheep etc grazing on the embankment), Albert Palmer (guard on Braintree line stationed at Witham – most of them were stationed at Braintree), Harry Griggs (Alf’s father, was a shunter, became a goods porter by 1945), Percy Chalk (taxi driver by 1945), Jack Smith (telegraph clerk – messages about trains, goods, etc; telegraph office wasn’t closed till late 1950s, after which the phone was used instead).
Middle row, left to right, Fred Keeble, Joe Burch (lamp man, looked after signal lamps, put in the oil etc, had two lamp lads), Olive Reynolds (known as Polly, perhaps a ticket collector?), Bert Dixie, Percy Ashcroft.
Front row left to right, Charlie Smith (aged about 15 in the picture, was lamp lad, climbing up and changing the lamps in the signals, on Rivenhall to Witham stretch, then box boy in the big signal box, east end of station, wrote down all the details and sent out messages – newspaper said he started as box boy but JN says more likely to start as lamp lad) , Stan Owers.