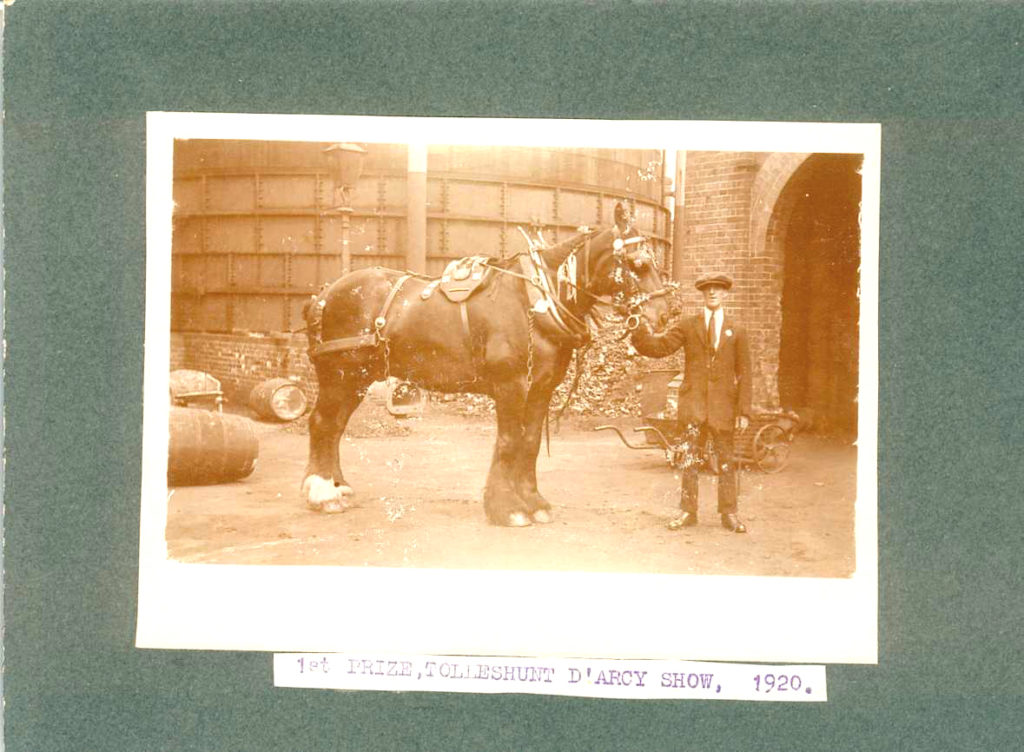 A sepia photo mounted on grey card, with a typed label reading ‘1st PRIZE, TOLLESHUNT D’ARCY SHOW, 1920’. Shows a horse and cart and two men, in front of Witham gas works. The cart has on it ‘THE WITHAM GAS LIGHT AND COKE CO. LTD.’ and possibly ‘J.CROXALL ????’ afterwards. Probably the man in front with the straw hat is Mr James Croxall, gasworks manager, and the one in the doorway with the cap is Arthur[?] Capon, the carman/carter at the works.

The minutes of the Witham Gas Company for 22 April 1920 say ‘Insurance on horse at £100 to be continued. Proposed by Capt Abrey and seconded by Mr W E Shee ‘That the Horse be shewn at the D’Arcy Show on Whit Monday and at the Essex County Show at Colchester in June’. The horse had been bought for £150 after its predecessor, bought for £100, had died after three months.

In 1922 when the new horse won a first prize at the Essex Show, the prize of £3 was divided equally between the manager Mr Croxall, and Mr Capon. See Essex Weekly News, 28 May 1920, re. ‘Horses in Vehicles’, ‘Tradesmen’s Heavy Turnout: 1, The Witham Gas Co., Tommy’. On the back of the card are three sepia photos of unnamed people. See also photo M810.

The show had been closed during the First World War, and the newspaper headline was “Tolleshunt D’arcy Horse and Stock show. Successful revival of a popular fixture”