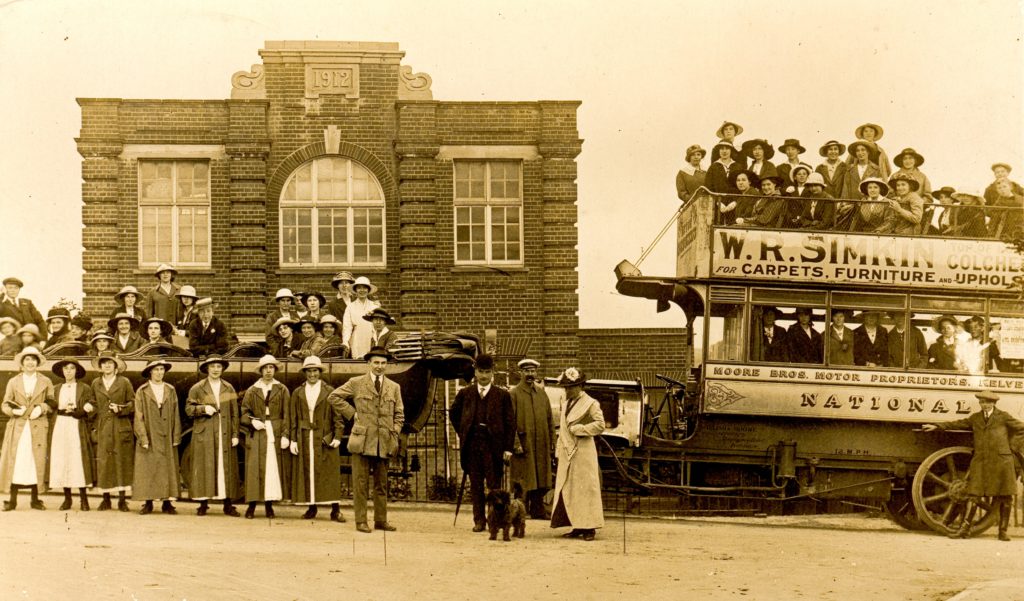 Outside Pinkham’s glove factory (1 Chipping Hill). A group preparing to leave on a firm’s outing to Clacton in some time after 1914. The man with a dog (Curly) in the dark suit in the centre is William Pinkham, the firm’s founder, and the lady right of centre is his wife. To William’s right is his son, W H Leslie Pinkham (Bert). The lady in white in the charabanc is Miss Minnie Ottley, one of the supervisors, whilst the boy wearing a straw hat, several places to her right, is Harold Keeble, who became the manager. Standing in front of him is his sister, Miss M Keeble.

The vehicles were both hired from Moore’s of Kelvedon. On the right is a Clarkson 12 hp National Steam Bus, built in Chelmsford. Later in life, its body was resting in a field near Kelvedon until the by-pass was built in the 1960s. I can find little information about the charabanc on the left.

Much of this information comes from an interesting series of letters in the Braintree and Witham Times in 1980; one of them was on behalf of John Pinkham, William’s grandson. The other two were from Sid Gurton and Ian Lawson.

M500 is another copy of this photo.