The Cage at Witham

The cage was a small lockup on the corner of Newland Street and Mill Lane, where wayward residents could be restrained for short periods. I’m not aware of any surviving photos. This one shows where it used to be. 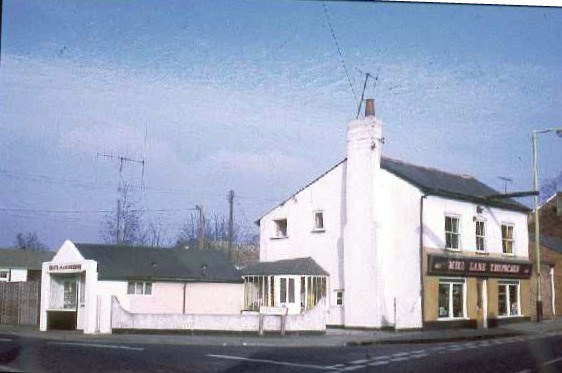 The cage was demolished in the 1920s, being old and unused, and in a space needed for the widening of the Mill Lane corner.

The rest of this account will consist of quotations  from old documents. Any comments that I’ve added myself, are in square brackets . Coloured text shows different parts of the document.

​Information, 1641
The Information of Jane Earle widdowe, taken upon Oath before Sir Beniamin Ayloffe, Barronet, Sir Thomas Wiseman, knight, and Henry Nevill, Esq. This 27th day of November. Anno Domini 1641.
“Shee saith that on Sunday was sennight shee was laid on her Bed, shee being then weary of a Jorney haveing come on Foot Fifteen miles the day before, and about three of the Clocke in the afternoon Robert Garrard, Philomen Pledger, John Freborne and Nathaniell Garrard, came to her house, and knocked at her doore, wheareupon shee arose from her Bed, and let them in, and they requiring a reason why shee was absent from Church, shee tould them that shee came Fifteen Miles the day before, and was very weary and Sicke, yet they not being satisfied, but by force carried her to the Cage, wheare they imprisoned her about a quarter, or halfe an hower.”
Signed:                         Signed:
Benj.Ayloffe                Tho.Wyseman

Recognisance, 1641/2
27 Nov. Jane Earle widow; to indict Rob.Garrard, Philomen Pledger, John Freeborne, and Nath’l Garrard for assaulting her in her own house and violently carrying her into the cage [all of Witham].
(Essex Record Office. Epiphany 1641/2  Calendar of Quarter Sessions. Q/SR 315/76.)

[Note: Jane Earle also made several appearances in the Church courts – one of them was because she was “commonly reputed and taken to be a woman of very rude behaviour”.
The four Witham men were probably parish officers.
The three distinguished men at the beginning, Ayloffe, Wiseman and Nevill, were local magistrates.]

Presentation against the inhabitants of Witham, 1669. [translated from Latin]
“Catasta (in English the Cage) in Witham, within the precincts of this lete, is exceedingly ruined so that it is a sin against the law, so that it is not possible to make it secure. Therefore it is ordered that the inhabitants of Witham shall mend and repair those same Catastam before the next first of May, under pain of forfeiting to the Lord five pounds.”
(Essex Record Office, 1669 Manor Court Roll for manor of Newland , ERO D/DBw M28)

Tithe map and award, 1839
The site which is now 132 Newland Street comprised four  plots on the Tithe Map, as shown in the table: they are also shown on my (very) rough map. The cage was plot 137A. This confirms its location as suggested by other documents, on the corner of Newland Street and Mill Lane. 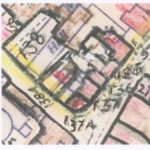 Witham rate and vestry meetings book, 1851
21 April 1851.
‘The subject of the Old Cage and the ground whereon it stands was brought before the meeting and it was resolved that the Churchwardens be requested to sell the Cage and the ground whereon it stands and to hand over the purchase money to the Engine House Committee”
22 September 1851
Extracts from accounts ‘for the repair of engines, buckets, etc’
Dr: Mr Cook’s Sale Bill £2 11s 0d
Cr: ‘By sale of cage by auction by Jno Cook to C Douglas esq, £30.’
(part of Essex Record Office Acc A5605)

An Essay about Witham, by someone who first came in 1883
“Sometimes you might find one in the Village Cage . The people in Witham are aware of the fact that such a one still stands in Witham. It is a building about 10 ft square, timber built and brick nogged, with slated roof, it consisted of two compartments, with a ring bolt let in the floor, where the prisoner was chained to. It fell into disuse at the passing of Sir Robert Peel Police Act nearly a century ago [1829?], and was rented by Mr Thomas Bailey at 2£ per annum, he used it as a general store, and although patched up is still to be seen opposite the Gas Works” (Essex Record Office T/P 116/83)
[the Gas Works was on the other [south] corner of Mill Lane and Newland Street; the site is now the Mill Lane car park].

Witham Urban District Council, minutes, 1921
31 October 1921, page 163
Mr H Lawrence offered to the Council for purchase, ‘the Historic Drunkard’s Cage now standing on his premises’. Clerk to ask price etc.
2 November 1921, page 168
Mr H Lawrence said he required £30 for the Cage. Clerk to thank him and say could not at present purchase it. “Mr E Smith proposed and Mr E Pelly seconded that the Clerk inform the Antiquarian Society of the offer now made to the Council, and should the Society be desirous of the Cage remaining in the Town the Council were willing that same should be placed in the Recreation Ground”.
[The proposers were Councillors Ebenezer Smith, newly elected the previous year, and Edmund Pelly of Witham Lodge]
19 December 1921
The Surveyor had had a letter from Society for Protection of Ancient Buildings re the Cage [no details]

From an account of Witham for  the Women’s Institute  Essay Competition, 1935
“Other Ancient Landmarks which have disappeared are the Tithe Barn, the pound, and the ‘lock-up’. …. Just at the bottom of Newland Street stood the lock-up for the temporary accommodation of local drunkards. It had a high gate and wooden fence. When the corner of Mill Lane was widened it was removed”. (Essex Record Office T/P 133/1)

Witham Urban District Council in Essex Weekly News, 1937
29 October 1937  “WORTHY OF PRESERVATION. – The Town and Country Planning Committee of the County Council are to be informed that the following buildings are worthy of preservation. The Old Pound, Newland Street: properties at Chipping Hill and facing the Parish Church: timbered properties in Bridge Street, owned by Mr W J Marshall; and Blue Posts House, Newland Street.” (Essex Weekly News, 29 October, 1937)
[The Pound was a place for keeping stray animals, and Witham’s Pound was near the top of Collingwood Road, not in Newland Street (see below). So we don’t know whether the writer meant the Pound or whether they really meant the Cage]

Old Days in Witham, no date, probably written about 1930
The old lock-up was at the corner of Mill Lane, part of the property known  as the Globe Inn, now, I believe, a paper shop. The Globe Inn had as landlord for many years a Mr Bailey, and I believe his son is still living in Braintree. I have been in this lock-up many times as a boy (not as a prisoner). It was then known as the Cage, and I have heard my grandfather state that he had seen people in the stocks which were at the  corner of Mill Lane opposite the Gas House, and quite close to the Cage.
(Essex Record Office, Acc 10510, page 2. No date but perhaps about 1930, because said to be written about 50 years after the workhouse closed, which was in about 1880. This the only reference that I [JG] found to the Stocks being near the Cage -see below for Stocks)

I’ll finish by briefly noting some of the other punitive structures in Witham.

The Pounds in general

The Pound of the Manor of Blunts Hall, 1570
(for keeping stray animals)
The jury present that the servants of James Stamford have broken the Lord’s pound and taken their cattle away.
(ERO T/B 71/1, p.60)

Stocks in general
I [JG] have seen a postcard of Stocks claiming to be at Witham, and I believe there is another picture in the George P.H. But there is no information about where exactly they were, or if indeed they really were in Witham. If anyone comes up with more detail, that would be interesting.

Stocks in the manor of Chipping, 1588
It is presented that all the inhabitants of Chipping Witham shall repair the stocks before the feast of Pentecost, on pain of 40 shillings.
(ERO D/DBw M26)

Stocks in the manors of Chipping and Newland, 1596
It was ordered “that any person who henceforth breaks any person’s hedge within this Leet against the will of the owner shall forfeit to the Lord 12d. for each offence or else to be placed in the stocks for the space of one hour”.
(ERO T/B 1/1, page 105)

Stocks in the manors of Chipping and Newland,
From “Old Days in Witham”, also quoted above.
No date for stocks, but written c.1930
I have heard my grandfather state that he had seen people in the stocks which were at the  corner of Mill Lane opposite the Gas House, and quite close to the Cage.
(Essex Record Office, Acc 10510, page 2. No date but perhaps about 1930, because said to be written about 50 years after the workhouse closed, which was in about 1880. This the only reference I [JG] found to the Stocks being near the Cage.)

The Whipping Post in Newland Street, 1629
A young boy tied red Irish crosses to it during a dispute with Irish soldiers on St Patrick’s Day.
(G E Aylmer, St Patrick’s Day 1629, in Witham Essex, Past and Present, 1973, p.92)