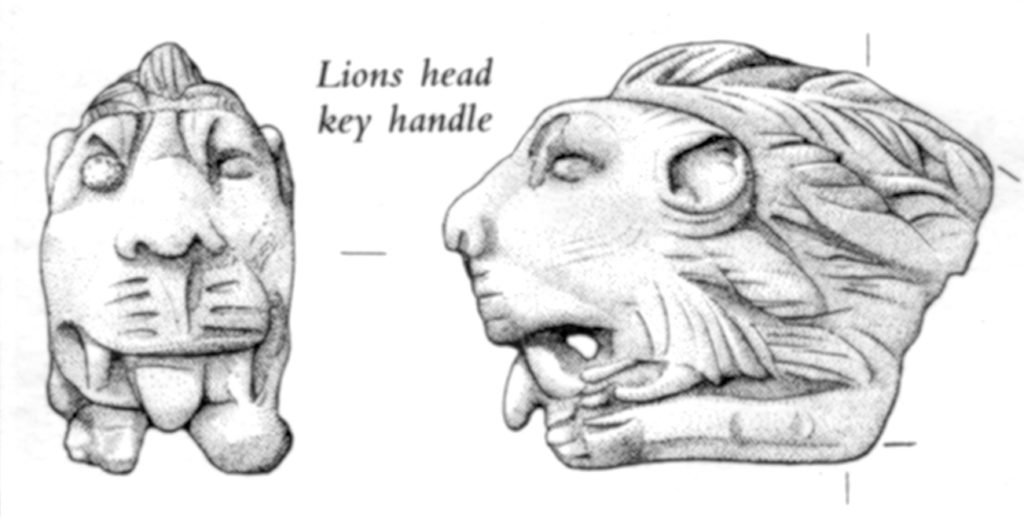 Roman key handle in form of lion. The article accompanying the picture says ‘More of Roman Witham comes to light. The south side of modern Witham has long been known as a focus of Roman and prehistoric settlement … recently, excavation at Maltings Lane has considerably extended our knowledge of Roman activity in the area. There was certainly a Roman farmstead here, with evidence for a well-appointed farmhouse … yet to be excavated and interpretation is based on demolition debris from a natural hollow nearby … As with most Roman sites, the excavation has produced a multitude of finds, but one of the best is a copper-alloy key handle in the shape of a lion. The rest of the key would have been made of iron, and soldered into the handle. The lion was dubbed ‘Clarence’ by the site workers because one of his eyes was damaged, giving him a cross-eyed look. Apart from this, he was in very good condition, and one of the best examples of a lion key handle from this country. The Romans were very security conscious, and keys are one of the commonest finds on Roman sites. Most are plain, but some had handles in the shape of animals. Lions are most common, but animals such as panthers, horses and dogs are also found. The keys were made on the continent in the third century, but evidently not all at the same factory, as they vary in quality, and many are rather crudely modelled. Several lion handles have been found in Essex before, but this is certainly the most impressive’.