The Spa at Witham
Miscellaneous information

For a time a Spa helped to enhance Witham’s reputation for gentility. The spring was in a field north of Powershall End. A recent dowsing survey indicated that the remains of two large structures are hidden underground there (existing houses with ‘Spa’ names are all later).

There had been an unsuccessful attempt to tap the waters in about 1700, and then in November 1735 the business was properly established by a written agreement between four partners. They were Sir Edward and Lady Jane Southcott, Dr James Taverner, and Martin Carter. Sir Edward owned the field, which was part of his Witham Place estate. Dr Taverner, a Catholic like the Southcotts, was the medical man. And Mr Carter was a very rich gentleman and lawyer seeking a good investment. A few years later he had a six-year old ‘negro’ boy ‘belonging’ to him at his home (now Avenue House). The lad fell ill, was baptised with the name Scipio Africanus, and died shortly afterwards.

The agreement refers to the ‘profits and advantages’ to be gained from selling the water, admitting people to the field, and renting out shops and stalls. Expenses included ‘wages to servants or dippers’, and the purchase of bottles and flasks.

Tickets could be obtained at inns in the town, or at the ‘Little Room’ next to the ‘Pump’. The centre-piece was the Assembly Room, or ‘Long Room’, probably constructed from the remains of the great Hall at New Hall near Boreham.

Dr Taverner published a booklet in 1737, stressing that the water was ‘of so exceeding volatile a nature’ that it could not be transported, however well corked. So invalids needed to ‘come to the Spring, and take it upon the Spot’. He also mentioned the ‘serene wholesome air’.

I have not found any comments from people who took the Witham waters. But the Sussex man mentioned later as finding Witham ‘handsome’ wrote that the town was ‘universally known on account of the spa, which has two very agreeable walks about it’.

Advertisements in the newly founded Ipswich Journal tell us about its medical successes and its social life. Visiting patrons could be fetched from their lodgings. During the summer season there were regular gatherings where people could mingle or play cards. The highlights were monthly Assemblies, with a Ball, held in the Long Room.

‘Coffee and refreshments’ were served at Barnardiston House in Chipping Hill by Jacob Pattisson. In due course he obtained a quarter share in ‘the waters’, and probably continued to run the Spa after all four of the original partners died (the first being Dr Taverner in December 1747).

The advertisements ceased when Jacob also died in 1754, but a house to let in Terling in 1756 was promoted as being ‘about two miles from Witham Spa’, showing that the image was still valuable. 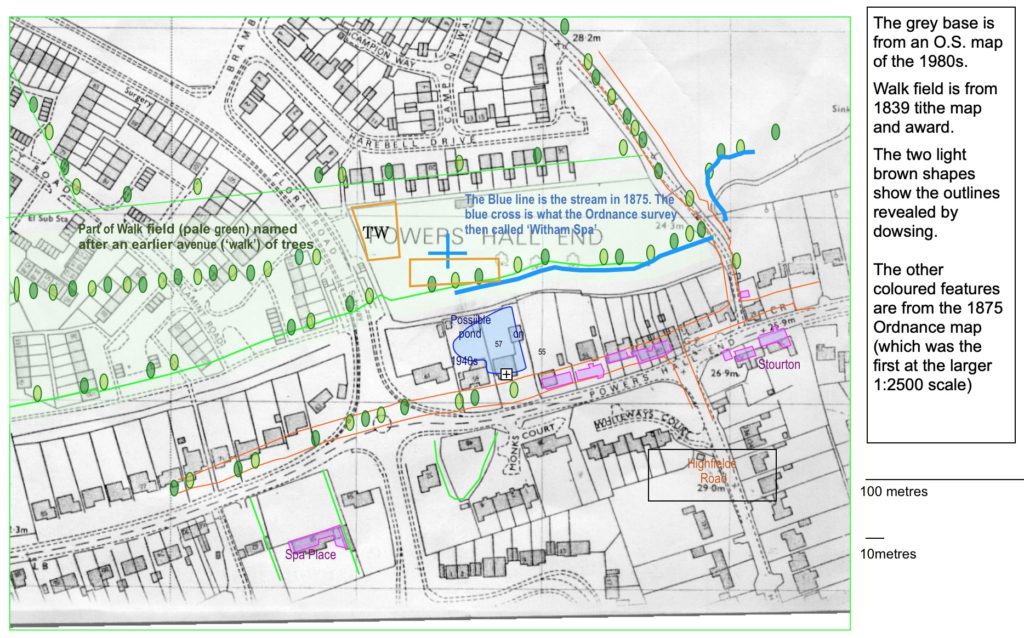 Above: Features of the Spa, on a modern base map.

Below: Possible traces of the Spa buildings in a dowsing survey by Don Pettican and Janet Gyford in 2002.