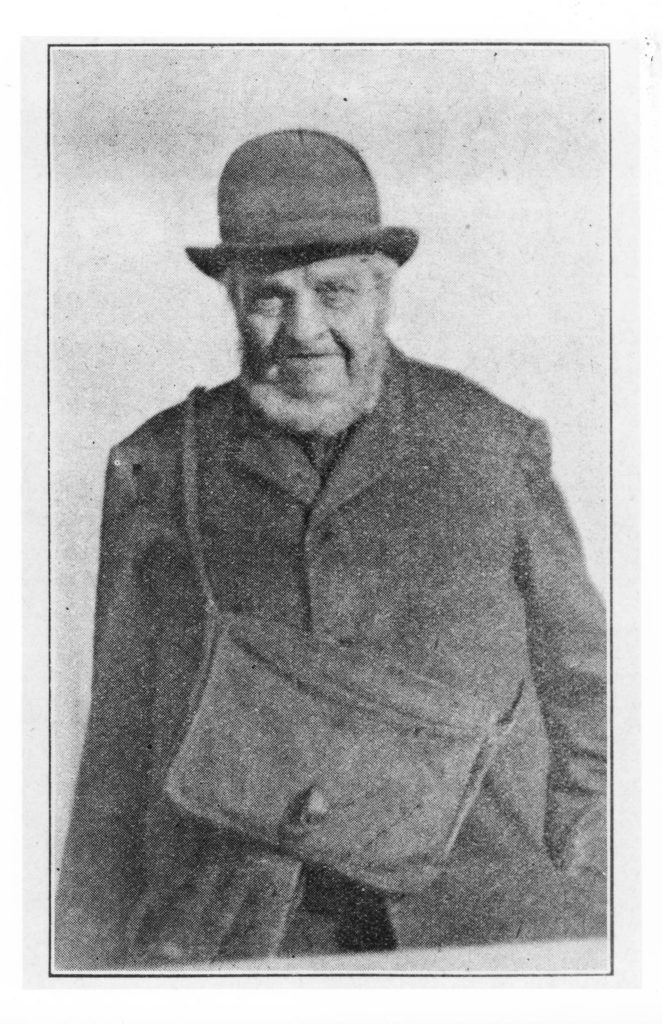 John Butler, Witham’s last town crier and bill poster, with his poster bag. He died about 1906-1908. From ‘Braintree and Witham Times’, with article about town criers. About him it says ‘‘A Miscellany by Nomad. The trade or practice of Town Crier has passed away in a practical sense, although one or two towns still appoint a “crier” purely for traditional reasons. Town criers … used to “cry” auctioneers’ sales, concerts, or any event which the public were expected to attend. … Witham’s last town crier was Mr John Butler, or “Lord Paget” as he was familiarly known. He succeeded a crier named George Wood. “Lord Paget” was a shoemaker by trade, and with Mr Joe Pluck was considered the best “snobber” in the town [Pluck was also a shoemaker]. His voice was in keeping with his frame, namely, on the big side. His stentorian preamble of “O yez! O yez! O yez! This is to give notice” etc. quickly drew a crowd. His fee was 1s 6d per announcement, but if Chipping Hill was included he tacked on an extra shilling. “’Butler bore a striking resemblance to Lord Paget, an MP of the day, and in conversation always upheld the views of this peer. By virtue of his shoe-mending trade he was often dubbed “Lord Patchit” while children would call after him “Patchit, cut it, cart it, stack it and thatch it”. He was usually addressed as “My lord” instead of “Mr Butler”. “Lord Paget” passed away about 25 years ago at a ripe old age, and the office of Witham town crier died with him’ There is more information about him and some earlier town criers in a post entitled “Town Criers”.