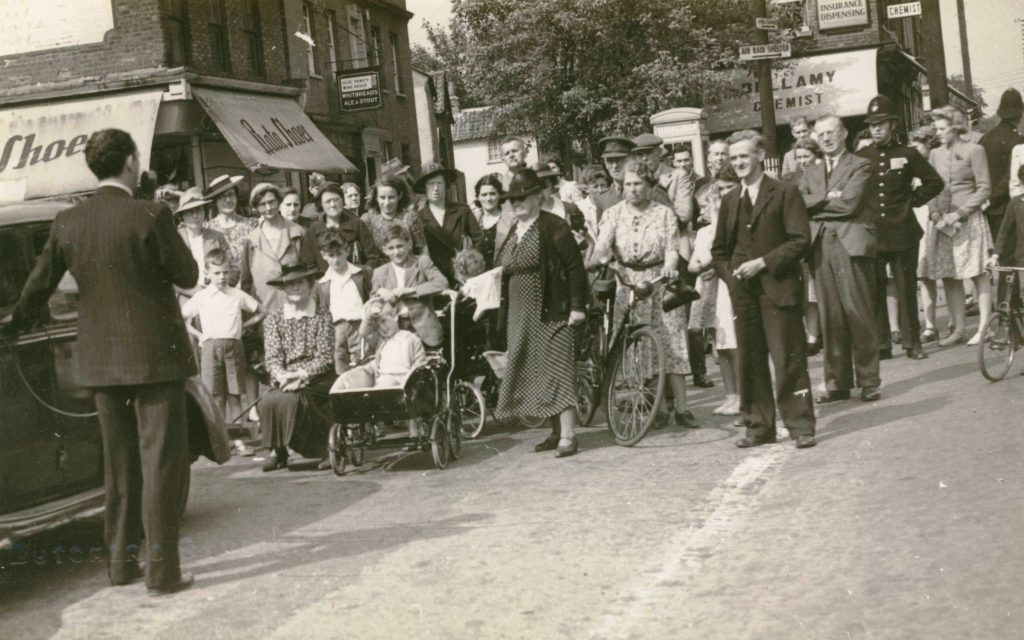 Same as M2090. Same as M2090. Tom Driberg campaigning in Newland Street for a Parliamentary by-election for the Maldon Constituency, which included Witham. It was held on 25 June 1942 and he won, as an Independent. Spectators include two men in military uniform, and two police constables..
There is a marked-up copy of this photo in the lecture “Tape 206. Talk by John Gyford about the late Tom Driberg, MP” (best found by doing a search for Driberg). . Not many people are known. (1) Tom Driberg speaking on left. (2) Mrs Betts of Guithavon Rise, daughter of Ebenezer Smith. (3) Lucy Croxall, with straw hat sloping, next but one to Tom. (4) May, sister of Mrs Cooper, surname unknown. (10) Joyce Richards, sister of Kathleen (left of large lady in spotted dress). (30) Derek Whybrew. (31) Roy Gage of Guithavon Road, aged 3, in front in push-chair, head on one side. (32) Chris Gage, Roy’s brother, aged 9, behind push-chair. (20) Joe Godfrey, to right in a dark suit, between the phone box and the telegraph pole, he worked at Clarke’s printers behind Clarke’s shop at 70 Newland Street. (19) Hubert Butler, left of and behind Joe, born in Rivenhall, father was Cyril, then they moved to ‘Gaza’, Chalks Road. (22) Perhaps Florrie Sneezum, just to right of ‘Air Raid Shelter’ sign, and of Joe Godfrey, with man behind her, she was Chris and Roy Sneezum’s aunt and worked in tax office. (25) Maisie Dudley, far right, between the two policemen (one facing one looking away), she was sister-in-low to Len Rowley of Rowley’s garage.
In the background, left to right, 68 Newland Street (Bata Shoes) with Guithavon Street going off the picture to the left down the side of the shop, 66 Newland Street (‘Old Trinity Wine House, Whitbread’s ale and stout’), buildings in Coach house way, telephone box, 64 Newland Street (Bellamy Chemist). Signs on telegraph pole in front of the latter pointing to ‘Air Raid shelter’.
Signs to air-raid shelters on post in front of Bellamy’s, will be to the Maldon Road park, where there were public ones. If there was a warning and you couldn’t get home in seven minutes you were supposed to go there.