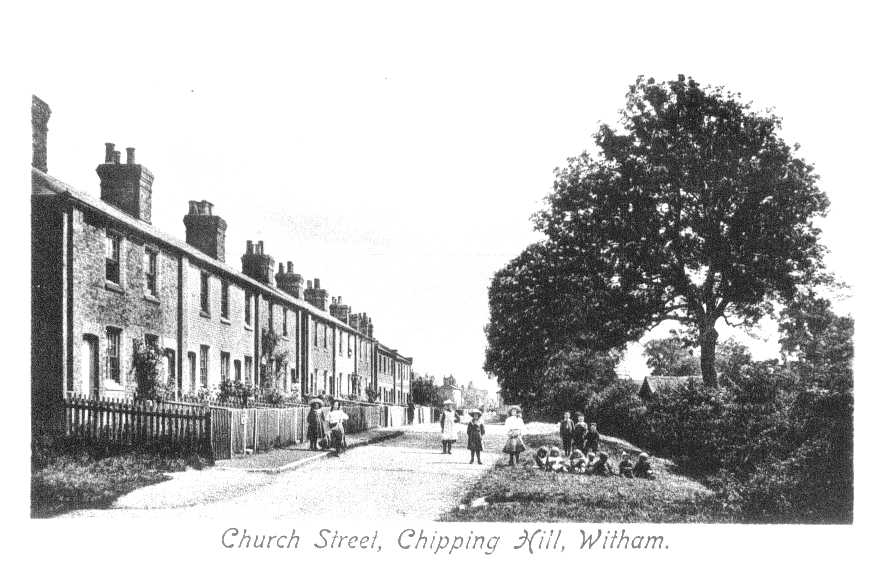 The top of Church Street, looking down. On left is ‘Chipping Hill Terrace’, i.e. 100-134 Church Street. On right is site now Bramston Green etc. A similar card belonging to Keith Newbitt, not copies, was addressed to Master S Sewell, Galbehayes, Springfield, Chelmsford and the message read ‘3/1 SS RE Camp. Friday eve. Dear S. Have been here to day cable laying. I was the operator so I was in the little tent. May see you Sat as I have put in for a late pass so I can stop later. From your Friend G T B’. Information from Ian Hook (Essex Regiment Museum) is that the numbers meant that this would be one of the new units of the Territorial Force (i.e. part-timers, raised after September/October 1914, i.e. the 3rd unit of the First Battalion. Each existing Territorial unit (the first unit) which had been mobilised for full time service raised additional units to hold and train recruits to take the place of the first unit if it was sent abroad. The letters are Royal Engineers Signal Service, who dealt with specialist communications until the Royal Corps of Signals was set up in 1921. ‘Signalling was very specialised and there were few Territorial units. Their members were often recruited from the GPO or specialist labour pools, such as Marconi’s’. Another copy of this card, not copied by me, belonging to June Clarke, had pm ’11’, presumably 1911, so the photo must be quite a bit older than the card..