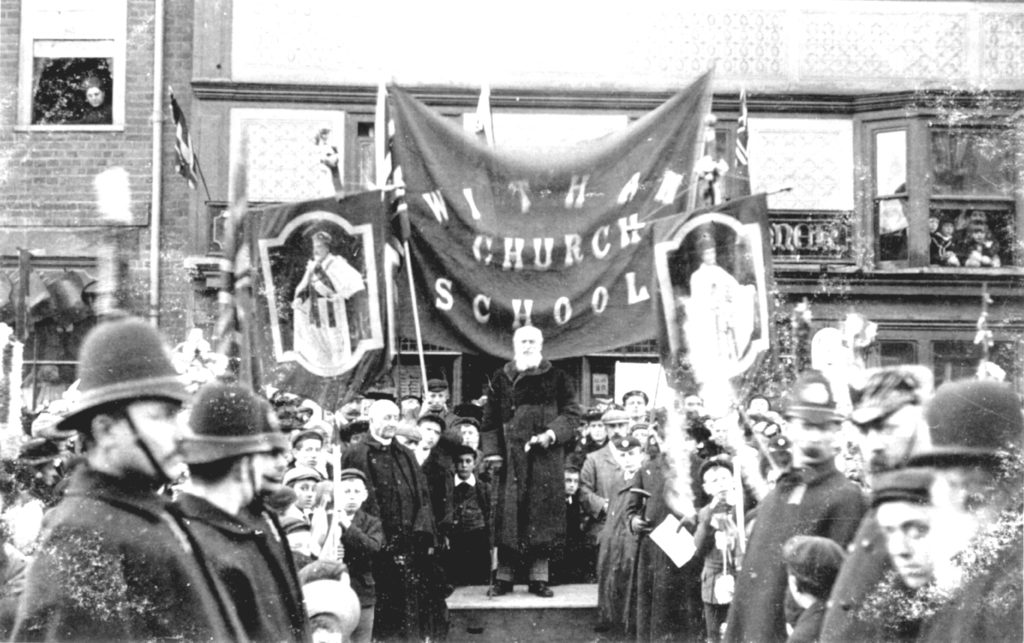 Trafalgar day, 1905, the centenary of the Battle of Trafalgar. The ceremony was held outside Witham’s main stationers’ shop (now 70 Newland Street). It was used as a stationers’ from the mid-19th century until about 1990. I can’t make out the lettering above the shop front. The shopkeeper at this time was Bernard Afford, but he had plainer writing later on.

Admiral Sir William Luard, in the centre with a long beard, aged 85, made the main speech. It was probably because of him, as a prominent naval man, that the occasion was marked particularly enthusiastically in Witham. Canon David Ingles (vicar) also spoke; he is in a clerical collar, left of centre, under the right-hand side of the portrait of the King.

The policeman with a moustache, on the right-hand side near the front, looking towards the camera, is Constable Gates. At the right front, short, near the corner, looking round suspiciously, with a cap, is possibly Bill Butler.

The photo may have been taken by Fred Hayward of Witham, who advertised in the Weekly News that “capital photographs of Admiral Luard and the gathering at Witham were obtained by Fred Hayward”. For a more distant view by Harry Hall, see M806.