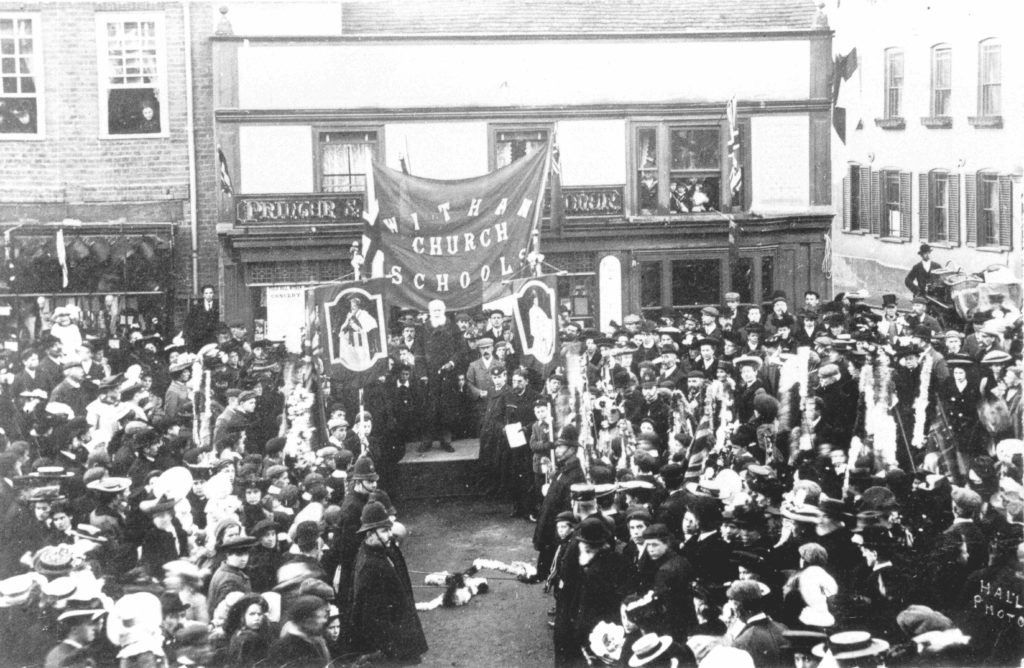 Trafalgar day, 1905, the centenary of the Battle of Trafalgar. The ceremony was held outside Witham’s main stationers’ shop (now 70 Newland Street). It was used as a stationers’ from the mid-19th century until about 1990. I can’t make out the lettering above the shop front. The shopkeeper at this time was Bernard Afford, but he had plainer writing later on.

Admiral Sir William Luard, in the centre with a long beard, was aged 85. He gave the main speech; it was probably because of him and his seagoing exploits that the occasion was marked particularly enthusiastically in Witham. Canon David Ingles (the vicar) also spoke.

The photo possibly includes Leslie (Bert) Pinkham, of Pinkham’s glove factory, aged about 15. Right of centre, just in front of the platform, in a long coat, and a cap with a white badge. Someone is holding a white piece of paper in front of him.

The policeman on the right hand side, facing across the gap, under the portrait of the Queen, is Constable Gates. The man with a flat hat in front of him is probably a postman (see M323 and M1107).

Either the postcard was not stamped, or the stamp has been removed. It was addressed to ‘Miss L Turner, Tiptree House, Witham, Essex’. The message reads ‘From Minnie showing how Witham kept Trafalgar Day October 21st 1905. To dear Lizzie with best love’.