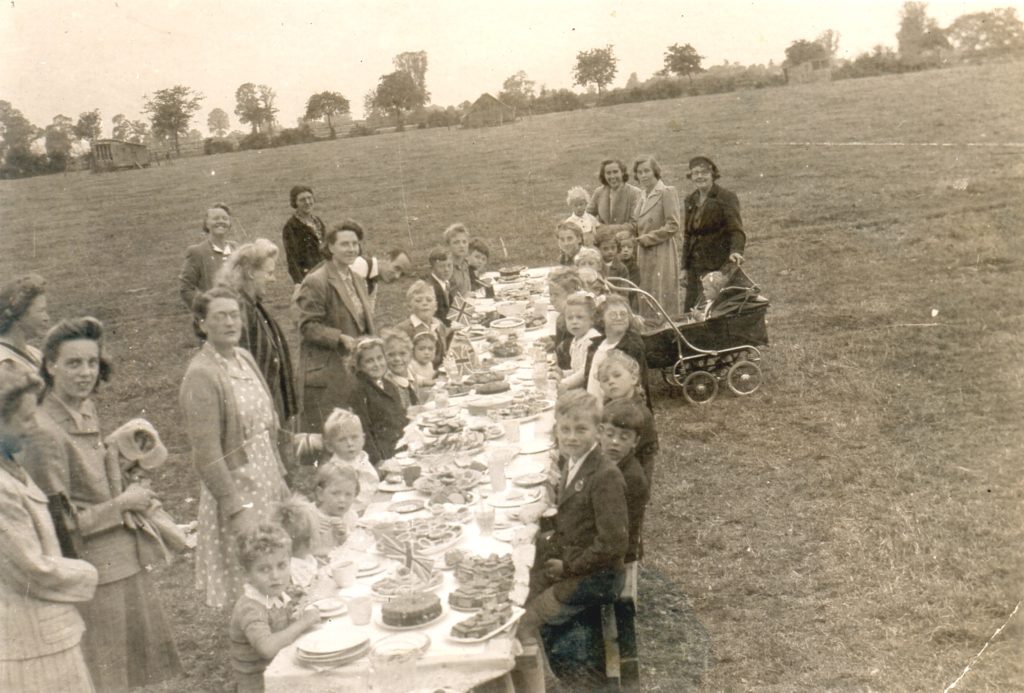 Keith Howell recalls: ‘Mr Joslin who ran the farm [Moat farm] allowed the residents to build a large bonfire around a hawthorn tree in the corner of the field, just out of the pictures. I remember that it made a mammoth blaze when set alight. All the children had prizes for various games and races’.

Keith Howell recalls that all the children had prizes for various games and races’.

Looking eastwards, away from Highfields Road.

Adults on left hand side of table, left to right approx.:
Mrs Margaret Reader, of 56 (far left, looking at camera, holding something.
Mrs Harris, of 70 (to right of Mrs Reader, with specs, looking at camera)
Mrs McConnell (in striped jacket)
Mrs Abbott of 94 (behind the striped jacket)
Mrs Vera Howell (in loose coat, right of striped blazer).
Mr Stoneham of 100 (bending down, head showing through side of Mrs Howell)
Dr Keating (in dark jacket, behind Mrs Howell)

Group of three women on right hand side of table:
Left, Mrs Stoneham of 100 (smiling)
Centre, Mrs Ashby.
Right, Mrs Nicol of 92 (with hand on pram)

Children, right hand side of table, starting at front.
David Nicol, at front.
Simon Alderton, smaller, eyes closed.
Next boy, curly hair, unknown.
Rosemary McKeoe, tall and/or standing up a bit back from the table, specs??
Dierdre Wright, smallish, white top, holding table.
Next, behind Diedre, unknown.
Jill and Jessie Stoneham, the first (Jill) has white hair and just showing from eyes upwards, just past the push chair. The other (Jessie) is to her right but partly behind her.
Hazel Ashby, between Jessie and Mrs Ashby but is quite squashed between them.
Mary Nicol, last one sitting, right on end of table, hair back.
Robert Stoneham, standing with mother; white top and white hair.