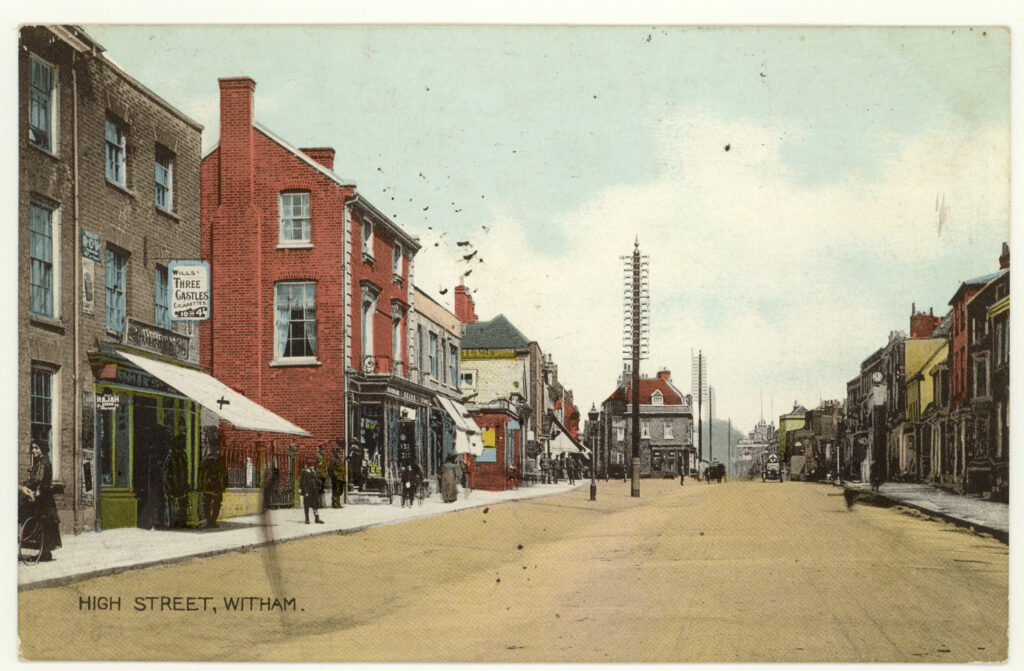 The wide part of Newland Street, looking east. On the left side of road, left to right, 90 Newland Street (with awning, Dibben’s, who was a hairdresser, marked with a cross, with adverts for Wills Three Castles and the Rajah cigar.),   The gap where the Constitutional Club burnt down in 1910 and which had/has the Congregational Church (now URC, not visible), at the back of it, 88 Newland Street (brown, to the right of the gap, with a projecting shop front, Beard’s ironmonger), 86 Newland Street (awning, pale),  84 Newland Street (low, probably Post Office – see the tall main telegraph pole outside in front of it, also the gas lamp. Medina Villas are behind), 82 Newland Street (also low), 78 Newland Street (tall, with —ILES, DRAPER written on the end, perhaps for Thomas Miles, who was in directories from 1910-1922) First World War soldiers outside.
It’s harder to distinguish buildings from here on, but AF—R- might be Afford, newsagent and stationer at 70 Newland Street.  Right of the centre, facing down the street, the end of 64 Newland Street, Bellamy’s written on it – a long-established chemist.   On the right-hand side of the road, left to right, 61 Newland Street (with clock), 63 Newland Street (lower, shop), 65 Newland Street, 67 Newland Street (3 stories, white), 83 Newland Street (bay window).  The vehicle in the middle of the road in the distance has a cross on, looks like an ambulance.  Postmark 17 August. Addressed to Miss Hillier, c/o Mrs May, 16 Draper Hill Terrace, Winchester Road, Basingstoke. Message reads ‘Dear Daisy, Just returned home 9 o’clock, also received your P.C. It is a most lovely place at Witham but very quite [sic].   Where I have put a x on the gate we saw a wedding this morning. Where I have put a x on Blind is Mr Corley’s shop what got burn a few years ago. Yours etc. Lizzie’.   The x on the gate for the wedding was probably at the Congregational church (URC), but is smudged. The x on the blind is at 90 Newland Street, which I believe was Dibben’s (hairdresser) from about 1899 unto the Second World War. William Corley, a bootmaker, may have been at 92 which is not on the photo.