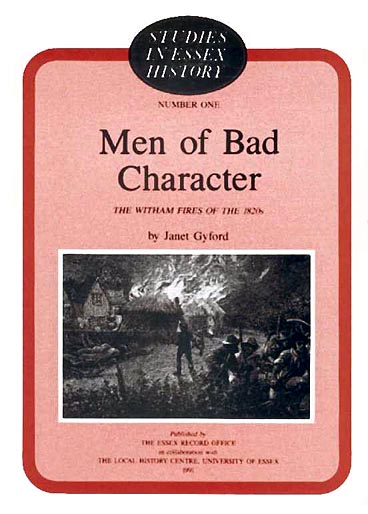 The story of a dramatic series of fires in the market town of Witham in 1828 and 1829. Consternation reigned, and a fatherless sixteen-year old boy, James Cook, was arrested. While he was in prison awaiting trial, the fires continued, but nonetheless he was hanged on the instructions of an eccentric judge. The book relates what happened next, talks about all the people involved, and discusses the events in the light of the historical context of the time.

There is an MA Dissertation of mine which treats the subject a bit more fully. The title is the same as the book. There is probably a copy in the Essex University Library.

2016 was the 25th anniversary of the publication of this book. In September 2016, I received an email about it from Susanne M. Lenz. She is a descendant of magistrate William Luard, who figures in the book, and we had been in touch about Witham in the past.

What she wrote was very heart-warming. Her nephew had found the book on the internet and sent her the link. She said:

I just read it and found it so fascinating. I sent it on to some legal types we know, and one a Luard relative …

Thank you so much for this insightful book … Here in Chicago with our 3,000 shootings this year alone … and our social situations in the States … I found your thesis right for the times! Still … nearly 200 years later!

Published by the University of Essex and the Essex Record Office. Out of print.