One of the heroes of Witham in World War II was Mrs G E Haste, who hailed from Colchester. If any readers knew her, or are related to her, I’d be delighted to know. She was Cook-manageress of Witham’s British Restaurant at 67 Newland Street, which opened in July 1941. These restaurants were provided all over the country, to serve cheap wholesome meals which did not need ration books. My friend Mike Bardell recently wrote about the one in Braintree.

In Witham, Miss Beryl Backler was the assistant cook, but within six months, she and two successors had all resigned, one of them saying the work was too much. But Mrs Haste herself persevered, in spite of the ever-increasing demands that were put on her. During the first week, there was not enough space on the ground floor to feed everyone, and some people were turned away. So the first floor was adapted to take more diners. Later, a complaint about noise meant that she had to put the children up there. Out of about 130 dinners served every day, 30 were for children. Other customers included most of the staff of the nearby Co-op department store, factory workers from Crittall’s, composer Martin Shaw from Boreham, and the well-off “ladies” of Witham who got a free meal in return for helping out.

Before long, there were “complaints about the food and the menus”. Mrs Haste tried a fish called ling, but it was “not much appreciated”. Fish cakes went down better. Her job was further complicated by the suggestion that she should serve every individual with the exact amount they said they wanted, rather than a standard meal. By the end of 1941, a second restaurant was opened at 22 Church Street, then known as St Christopher’s, and Mrs Haste was expected to keep an eye on that too (it was not much used and closed in 1943).

In early 1942, she agreed to work for nothing to give tea to the brass bandsmen parading for Warship Week. Then there were the pies. In March 1942 it was decided that 250 meat pies would be made at the restaurant “for distribution in Hatfield Peverel”. After a week, larger ones were demanded.

Briefly there was a flurry of good things. There was a plan for the staff to have an outing. Thanks were received for feeding the children helping with the harvest in Terling. And an army chaplain phoned to say that out of many such restaurants he had visited, the Witham one was the best.

The biggest challenge was yet to come. Rivenhall airfield was being constructed by 500 or 600 men, mostly brought in from Ireland. The British Restaurant staff were asked to provide all their meals. When this was first mooted in October 1942, Mrs Haste was “eager to undertake the work”. Four months later she asked to be relieved of it, and by October 1943 she had resigned altogether. No details were given, but we do know about nearby Earls Colne airfield. There the Irishmen did not like English food, and complained about it constantly. They asked for Gippo, a thick gravy, and thereafter were given it every day, but it only helped a little.

After Mrs Haste’s departure, the restaurant continued in much the same fashion until the end of the War in 1945. There was then a national debate about whether the restaurants should stay open or not. A petition from 73 diners pleaded for the Witham one to continue, but it was closed on 27 October 1945. 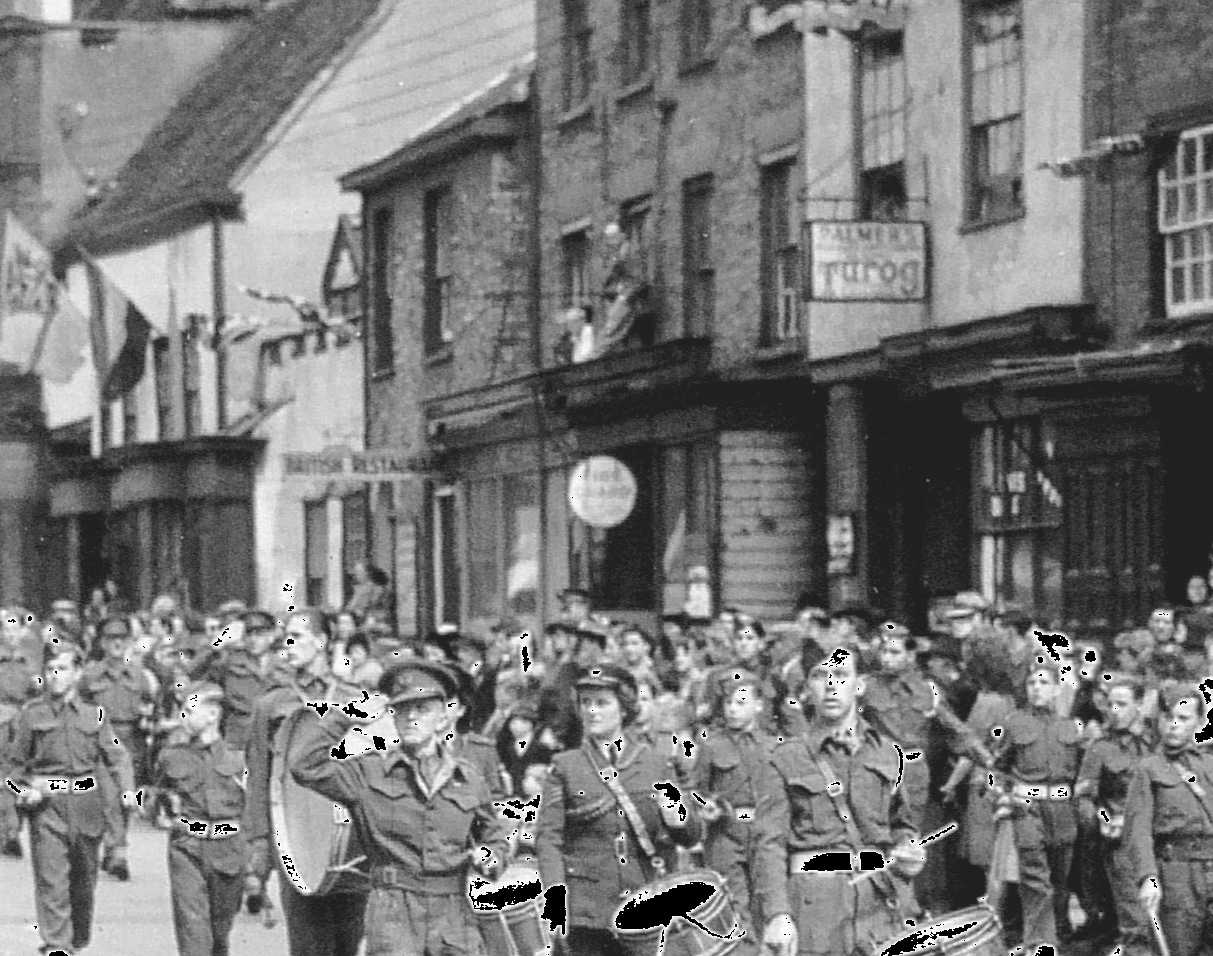 The horizontal British Restaurant sign, at 67 Newland Street, is to the left of the round sign. The occasion was the “Victory Parade” in May 1945. (M1811)

A version of this article appeared in the Braintree and Witham Times in August 2011.