Notes on the Pavelin family, including Florence (Flo)

John, William, Alfred, Walter and Florence (Flo) Pavelin, from censuses and from information from Flo and John 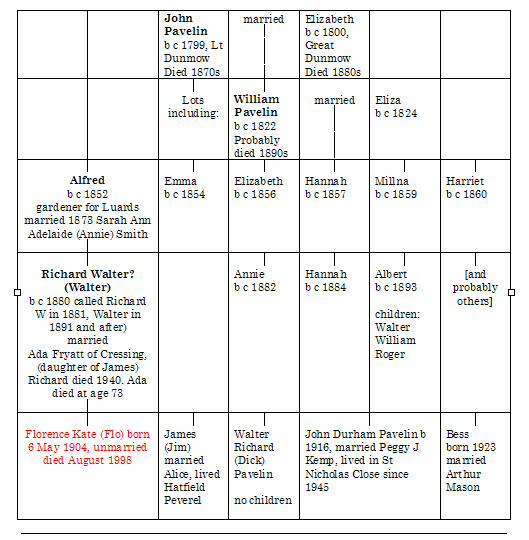 1841 census
See above for William

4. ALFRED and ANNIE/SARAH with RICHARD WALTER

Braintree and Witham Times, 28 March 1940, page 2
‘Death of Witham gardener. Well known as a gardener, Mr Richard Walter Pavelin, aged 61, Church Street, Witham, died last week. For 13 years Mr Pavelin was employed as a gardener at the Grove by the late Mr Percy Laurence, and afterwards at Freebournes Farm by the late Mr Bertie Wakelin. During the Great War he served in the Durham Light Infantry. As a young man he lost the use of one eye’.

Residence:
Family in Grove Cottages till First World War, father in army and moved to Ardley’s yard (behind 137 Newland Street). Then to Bridge Street.
Meanwhile Flo herself lived on the premises at most of the jobs mentioned below.
Then about 1939 to 127 Church Street. Her father died in 1940 and she took over the tenancy and stayed there the rest of her life.

Jobs:
Left school c 1918.
First spent a week at the glove factory till the doctor said she wasn’t fit for it.
Then looking after children at Reverend Reed’s at the Parsonage.
Then general help at the doctors’ surgery, 129 Collingwood Road, serving at table, cleaning, answering phones, etc., there for about six years.
Then to Allshorns at the bank (61 Newland Street) as cook, was there when 1930 electoral roll taken, i.e. in autumn 1929. There seven years.
Then briefly with them to Ealing when Mr Allshorn retired but didn’t like it; there when R101 Airship crashed in October 1930.
c 1934, back to Witham and cook at Gerald Bright’s.
Then at home for a while because of ill health.
Once, after illness, not known when, temporary cook for family of Armstrong Gibbs at Frinton.
Then cook to Gurneys at High Hall, Wickham Bishops, for three months, there in 1937.
Then to Mount Hill Chelmsford as cook.
Then when Second World War started, returned to Witham and lived in Church Street house with her mother, and from 1941 worked in the Co-op in provisions. Stayed there till retired, 1964. On Provisions nearly all time, just before she left, on checkout in new self service system.