55. Round about the Jubilee Oak 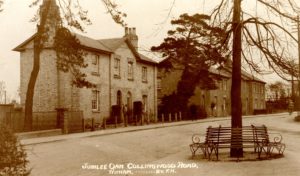 This photo of the Jubilee Oak in Collingwood Road was taken by Fred Hayward, who lived nearby. It includes Miss Smith’s dressmaking establishment at Fir Cottages. There was a brass plate which read “Miss Smith, Robes”, just to the left of the right hand door.

The Jubilee Oak was planted in 1887 to celebrate the Golden Jubilee of Queen Victoria. Mrs Luard, wife of the Admiral, did the deed, in the presence of a band and a crowd of several hundred people. Too early for a photo, sadly.

But in 1935, we read in the newspaper that “Townspeople indignant at lopping of Royal memorial. Quite a Stir. Has now been shorn of all its branches to such an extent that it closely resembles the electric light pole which stands alongside. Only three or four arms of 2ft or less remain”

It was rumoured that the culprit was an employee of the new East Anglian Electricity Supply Company, and that he had been encouraged by County Council workers.
Fortunately the tree seems to have recovered in due course, and has done well in the circumstances. It still stands there in Collingwood Road, encircled by its original iron seat.

Mrs Coleman (nee Brown) recalled that “For years and years my sister and I called it the ‘Jibley Oak’! I thought it was a Jibley Oak!”

Originally there were no houses on either side of Collingwood Road from the tree almost down to the Newland Street junction. And there were no street numbers. So any establishment near the tree was known as being “up by the Jubilee oak”.

So I’ll look at a few of those places that were up by the Oak. One was the dressmaker at Fir Cottages, whose brass plate at the top of the steps said “Miss Smith, Robes”. Mrs Ralling (formerly Annie Baldwin) said that “my two sisters were apprenticed there. Never got any wages for a couple of years, never had no money at all. And there was about seven or eight girls in the workroom.”

Elsie, one of the sisters (later Mrs Baxter), said “We used to do dressmaking and millinery for all the big people all round about, and people up the [railway] line used to come in too”.

Fred Hayward (FH) took photo 1 of Fir Cottages. Before about 1920, he took most of the photos of Witham, and they are very skilful, helpful and interesting to us today. This photo may have been taken from his garden. His bungalow was built in 1908 right next to the Jubilee Oak (55 Collingwood Road).

It was the first house at this end of the road, and as such, it figured in many people’s memories. For instance, Mrs Bajwa (nee Chalk) said “he built the first, and there was, ploughed fields, wasn’t a single house there”.

After about 1920, Fred Hayward’s name and initials don’t appear on photos any more, and he worked at Afford’s stationers on the corner of Guithavon Street. By 1957, when he received a presentation at the bowls club, no-one seemed to remember that he had ever been a well-known photographer. 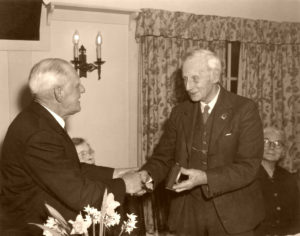 Fred Hayward, on the right, receiving a presentation at the Bowls Club in 1957. He was 87 and had been a founder member in 1904. He said he had occupied every post from weedpuller to President.

Another notable place by the Oak was Heddles (48 Collingwood Road). It was built in 1910 and is still imposing today. The Heddle family were leaders of the evangelical church known as the Peculiar People, who were particularly strong in south Essex.

William Heddle was born in Orkney but moved to Southend. He was one of the Peculiars’ Bishops for 41 years. He had the house built at Witham, and his son Oscar lived there and ran the clothing business (now number 48 Collingwood Road).

Mrs Mabel Nicol described how it worked. “They used to go round, ‘Johnnie Fortnights’ we used to call them. They used to go round and people used to pay a shilling a week. They’d got a tremendous big round, you know. People out in the country, they’d have these clothes. He did ever so well. They’d take orders, you see, and then next week they’d take something what was ordered, you know, shoes, or a dress or whatever. And if they decided they’d have it, then they paid a shilling a week.”

The customers were mostly poor, and the goods were ready-made. So Mr Heddle’s business was something of a contrast to “Miss Smith’s Robes”across the road.

I think Heddles continued till about 1970. I remember that in the end you could buy clothes there in the usual way, by going into the front room on the left.

Another notable place by the Oak was the Nurses’ Bungalow at 46 Collingwood Road, built in 1920 as a War Memorial, and mainly remembered as a maternity home. But that deserves its own article, so I think I shall have to write about it another day.