During most or all of the taped interviews, I had very stupidly not figured out that Mrs Ireland’s mother was not married, and that Mrs I was brought up by the Rushen family in Church Street, where she called Mrs Rushen her grandma, though as far as I know she was not related. So some of the questions and answers do not really make sense. I learnt more from an unrecorded conversation in December 1989 and much of the following summary is based on that, though there are still some inconsistencies. I have tried to put clarifying notes in square brackets in the transcripts. 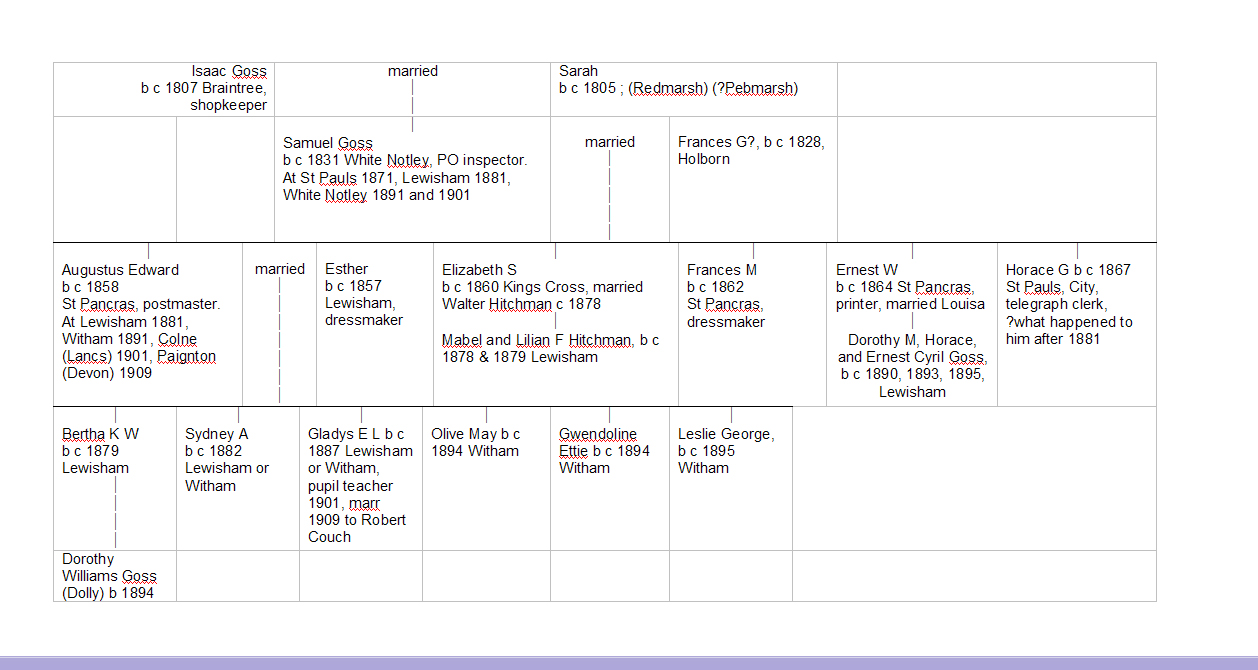 Her mother was Bertha Kate Winifred Goss (unmarried, and must have been about 15 when Dolly was born). According to tape 32, side 10, she died when Mrs Ireland was four days old but this cannot be so as she is in the 1901 census; perhaps she died after a later baby?

Grandparents: Bertha, Dolly’s mother, was daughter of Augustus Goss, who was thus Dolly’s grandfather. He was postmaster at Witham post office (then 84 Newland Street). In March 1895 he and his family moved away to Colne in Lancashire, were still there in 1901, then in Paignton, Devon, by 1909 (but not there 1914) (newspaper report in Essex County Chronicle 30 March 1894, 1901 census, and marriage of Gladys in 1909). Mrs Ireland said her grandfather was a postal inspector later, and sometimes would come to Witham in this role in the 1920s after Mrs Ireland had married.

Great grandparents: Samuel Goss  and his wife Frances at White Notley, (a shoemaker?). Perhaps moved there from Witham when they retired? Mrs Ireland would go and live there in the holidays, partly to stop her peapicking etc. with the other children. She didn’t play with children there. She used to call the great-grandfather ‘uncle’ till people, especially the postmen who knew the family, said he was her great-grandfather. See the beginning of tape 33, side 9, about the golden wedding of Samuel and Frances in 1904.

Brought up by: Mrs Rushen, whom she called her grandma. Probably in a house behind about no. 6 Church Street (Mrs Raven mentioned this location in her interview and it ties in with the 1891 census where the Rushens are six houses above the White Horse). Mrs Rushen brought her up and received money every month for it. I thought Mrs Ireland said this was from her grandfather and/or great-grandfather[?], but on tape 32 side 10, the implication seemed to be that it came from her father’s family. In some of the questions I was thinking that she was brought up at the Post Office in Newland Street which she wasn’t.

Message from John Macdonald, April 2019.       “I have read this with some interest as I always thought that “Dolly” was part of my family. My Maternal Grandmother was Mabel Nellie Haggar (nee Rushen), in the 50s and 60s I lived in Peckham, London at the pub run by my Grandparents, “The Havelock Arms”. A couple of times a year, my Grandmother would take me on the train, or sometimes in a hired car with a uniformed driver to visit my parents who still lived in Witham. At this time, most of her siblings were still living locally and, if time allowed, we would call on some of them. As I have said, with the innocence of youth, she was “Aunt Dolly”, I knew no better

Lived and work:
Born: 84 Newland Street.
Till about 1910: With Rushens, Church Street.
After 1910: With John Wadley and his wife, probably at Dean House, 21 Chalks Road. Helped in their shop (48 Church Street) and collecting rents from their houses, especially in Church Street.
1920s onwards, i.e. after married:    12 Chalks Road

She didn’t know anything about the family circumstances until she was about sixteen and Mrs Rushen died or was dying. Mrs Rushen said ‘I can’t go on for ever’. This upset Mrs Ireland.

When she was a child, no-one ever said anything to her about her parents, and she doesn’t remember ever thinking about why she didn’t have a mother – ‘I never asked’. She was happy and so fond of Mrs Rushen that it didn’t occur to her that there was anything wrong. When she saw Mrs Rushen’s grown-up children [later?], they said things like ‘My mother brought her/you up’.
Mrs Rushen was the District Nurse before Mrs Kentfield.
At school people would say to Mrs Ireland ‘You’re a lady’s child’. She always had nice clothes, velvet etc.

When she was sixteen she wanted to go to Australia but the great-grandparents wouldn’t let her; they said ‘You must realise you’ve cost us a lot of money’ (see tape 32, side 10, suggesting that it was her father’s sister that was in Australia). Mrs Raven said that Mrs Ireland’s parents went abroad (unrecorded conversation with Mrs R, January 1978).

She said people didn’t use words like ‘illegitimate’, they would say ‘love child’.

1901 census
Can’t find Sydney who would have been about 19, perhaps he died or emigrated. I got a marriage certificate for Sidney Alfred Goss aged 19 who married 1901 in St Marylebone but not the right person (his father was Alfred James Goss a ‘chequer’).

1914 directory of Devon (online)
Postmaster at Paignton is no longer Mr Goss but F S Staines. Can’t see any Goss in the residential part either.