The obituary and the article which are shown below appeared in Essex Archaeology and History News, number 111, in April 1991.

The three cottages were said in the 18th century to be “three tenements previously one”. They are known to have 15th-century timbers surviving. The grey-brick frontages were added in the 19th century – the three are all different.

Number 22 was known as Chantry Cottage.

Dorothy L Sayers was the well-known author who lived at number 24 (Sunnyside) from the early 1930s until her death in 1957. She also had a flat in London.

Cocksmiths was the old name of number 26, going back to at least the 1600s. At the time written about below, it was being used to describe the whole group of three.

Mike Wadhams was a gifted historian of timber-framed buildings who had recently died. He had helped to lead the Witham Archaeological Research Group, and went on to join the County Council’s Historic Building Section. He, and his colleagues there, had worked successfully to ensure that numbers 22-26 Newland Street were preserved, in spite of many difficulties.

The short first item below is an obituary of Mike by Paul Gilman. The second, longer, item, was written by myself in 1991. It is an account of my conversations with him about the cottages. 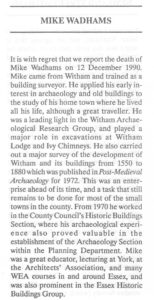 Below: an article by Janet Gyford written in 1991, about Mike Wadhams and Dorothy Sayers Cottages, 22-26 Newland Street (Cocksmiths) 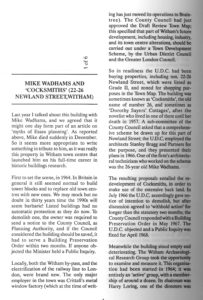 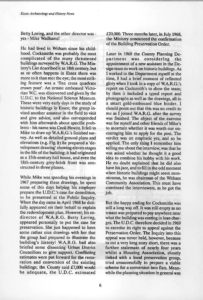