SUMMARY OF THE HISTORY

See also   http://www.workhouses.org.uk/Witham/
This is by Peter Higginbottom who is a specialist in the history of workhouses and has taken a particular interest in Witham.

Built under the ‘Poor Law Amendment Act’ of 1834, which required the amalgamation of parishes into Unions for the purposes of poor relief, and that the Unions should build workhouses. At first the new Guardians continued to use the old Coggeshall and Witham workhouses. They didn’t decide to have a new one till 6 March 1837 (and then only on the casting vote of the chairman, Lord Rayleigh). The following information is mostly from the first two volumes of Guardians’ minutes (ERO G/WM 1 and 2)

Plans: decided on 3 April to advertise for plans, and on 8 May accepted the ones sent in by Scott and Moffatt. On 12 June Mr Moffatt attended and received instructions and again on 21 August with the builder. It took at least two requests in Sept to get Mr M to come again and sign the contract. After completion, in May 1839, the Guardians instructed their clerk ‘to write to Messrs Scott and Moffatt to inform them unless they came to inspect the works at the Union House within a fortnight, the Guardians would appoint someone else to do the same’. ON 6 January 1840 they decided to write to Scott and Moffatt saying that ‘the Board objected to their Bill’.

Land: various sites were looked at, and the Guardians at first chose a piece of land between Witham and Rivenhall but the tenant declined to vacate it, so in June 1837 they agreed to buy the present site in Hatfield Road from Colonel Strutt.

Completion and opening: It’s not entirely clear when the new Workhouse was opened but it must have been either at the end of December 1838 or during January 1839. On 14 December 1838 the Guardians were still advertising for tenders for goods to be delivered to the old workhouses. But adverts for the new chaplain, schoolmaster, schoolmistress, porter and nurse say that they were to take up their duties according on 25 December 1838. And certainly by 1 February 1829 tenders were sought for delivery of goods the ‘Union House’. (Chelmsford Chronicle, 23 Nov 1838, 14 Dec 1838, 1 Feb 1839).

I haven’t looked at minutes after March 1840.

In c.1880 the Witham Union was disbanded and the Witham workhouse closed. The Union was amalgamated with Braintree and the residents from Witham sent there.

I think that a problem with the Master of the workhouse at Witham precipitated this change. I haven’t researched it properly but I have a note from the Guardians’ minutes of 31 March 1879 about charges of drunkenness against the Matron and of ‘Falsehood’ against the Master (Mr Crockett). Also, a committee reported back that had been appointed to investigate charges preferred by the Nurse against the Master. These were considered proved. There is reference to Mr C being absent from the workhouse for his own pleasure, collusion with the porter, waste in cooking the meat, the mode of administering, and overbearing conduct to officers of the House especially the nurse.

The Local Government Board were asked to act. Then on 14 April there was a proposal to dissolve the Union, but Braintree preferred amalgamation. I seem to have stopped there in looking at the Guardians’ minutes (ERO G/WM)

Maybe the newspapers might shed more light if they were allowed to report such things.

The South Metropolitan School District bought the building for a Poor Law School in 1882. The SMSD was a combination of various London Poor Law Unions, founded by order of the Poor Law Board in 1849; they had various other schools. Witham was for ‘orphan and deserted children’ – boys and girls – from the District’s area, i.e. Camberwell, Greenwich, Woolwich, Stepney etc.

According to a booklet about the District (LMA SMSD 79)

Records at London Metropolitan Archives with reference SMSD are:

(2) about the district in general but possibly relevant: booklet about the SMD and its Dissolution (79, see above). Also minutes, accounts, statistics, loose papers, letters from Poor Law Board, which I haven’t looked at.

What most people remember are the ‘Bridge Home boys’ who were often very capable and had an excellent brass band. There must be books about Industrial Homes. I think they may have been intended, at least in part, for boys who were troublesome.

During the First World War, there was a Red Cross Hospital for wounded soldiers in the separate Hospital / Infirmary Wing, which is shown here on this Ordnance Survey Map of 1922 (scale of original 1:2500). (see also photos M612 and M630) 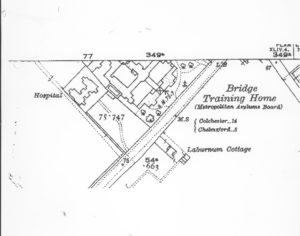 The whole place was sold in 1923, under the following description:

(1) First proof of printed sale catalogue from which the above quotation is taken. London Auction Mart 21 Feb 1923

(2) Schedule of deeds, including bundle of old abstracts and deeds.

Records at London Metropolitan Archives with reference MAB are:

(2) about the Board in general: minutes (in history library), which I haven’t looked at)

The RECI bought it in 1923. They were the people who ran Severalls hospital etc. at Colchester.

Exchange of emails with Peter Higginbotham who runs http://users.ox.ac.uk/~peter/workhouse/

Envelope-to: janet@gyford.com
From: “Peter Higginbotham” <peter.higginbotham@computing-services.oxford.ac.uk>
To: “Janet Gyford” <janet@gyford.com>
Subject: Re: witham, essex
Date: Mon, 8 Nov 2004 17:41:32 -0000
Hi Janet,
thanks very much indeed for passing all this on. Some very interesting stuff which I’ll try and add to my Witham page (with an appropriate credit to you, of course) when I get the chance. My impression is that S&M spread themselves very thin – chasing round the country for new contracts and not really spending enough time on their existing ones. All best wishes and many thanks again, Peter

—– Original Message —–
From: “Janet Gyford” <janet@gyford.com>
To: “Peter Higginbotham”
<Peter.Higginbotham@computing-services.oxford.ac.uk>
Sent: Monday, November 08, 2004 8:54 AM
Subject: Re: witham, essex
> Hello Peter
> Attached is a summary I did re the Bridge Home (Union Workhouse) for an architect who was recently working on the refurbishment for flats. He sent me a very long report of a survey he did of the place, I’d better not send it you without his consent but he might well send you one too is you ask him and explain your interest. He is Rob Kinchin-Smith, email kinchin-smithr@rpsplc.co.uk. Also I’m sending notes on something from PRO and on the first two volumes of minutes of the Guardians. I always find it amusing that they got so fed up with Messrs Scott and Moffatt. When the Witham local worthies were planning a new church in 1841 Messrs S and M submitted a plan and came to a meeting but were rejected – it doesn’t say anywhere why this was, but I suspect that their reputation as slow workers at the workhouse didn’t help. ALso rejected was William Tite who became famous for the Royal Exchange. INstead they chose a John Brown from Norwich – his ceilings started falling down not long after the church was finished and I wouldn’t really say the building is very distinguished.

There is also some stuff in Essex Record Office about the old parish workhouse, ERO D/P 30/18/1, 2, 7, and 30/12/26, but I don’t seem to have anything from that in a conveniently sendable form.
All the best Janet

At 20:50 07/11/04 +0000, you wrote:
>Hi Janet, thanks very much for your kind words. I think I had perfect picture-taking conditions when I was at Witham. Thank you, yes I’d be very interested in any additional information you have on the place.

—– Original Message —–
> >From: “Janet Gyford” <janet@gyford.com>
To: <Peter.Higginbotham@workhouses.org.uk>
> >Sent: Saturday, November 06, 2004 10:11 AM
>Subject: witham, essex
> > Hello Peter I’ve been admiring your pics of Witham Union Workhouse (the Bridge) on the web site – I tried often to get the archway with the tower behind but always got it wrong ! I have some more info, from PRO etc, if you are interested ? Janet Gyford

EMAILS – WITH ROB KINCHIN-SMITH ABOUT ARCHITECTURE

Envelope-to: janet@gyford.com
Subject: RE: bridge home, witham -> [Scanned]
Date: Mon, 11 Oct 2004 11:09:02 +0100
Thread-Topic: bridge home, witham -> [Scanned]
thread-index: AcStfxY1DJ9GQm7hTXy/OxhlF96Q2AB+KTeg
From: “Rob Kinchin-Smith” <kinchin-smithr@rpsplc.co.uk>
To: “Janet Gyford” <janet@gyford.com>
Hi Janet
I’d say that, given the date, a wall cavity would be most unusual, so estimating on solid walls would be an educated guess / assumption.
Many thanks for all your help in guiding me round the archives and for the very useful information you supplied.
If its any help to you, please find attached a copy of the report with details of the (then) proposed development and the assessment thereof removed.
I gather that the prospective developers sold the property on, so I have no idea now what has become of the building, but hopefully whatever happens to it, it will be / has been sympathetic in character.
Very best regards and thanks again for your help
Rob

—–Original Message—–
From: Janet Gyford [mailto:janet@gyford.com]
Sent: 08 October 2004 22:38
To: Rob Kinchin-Smith
Subject: bridge home, witham -> [Scanned]
Hello Rob
I sent you some info about the history Bridge Home at Witham a while back.

I might have mentioned then that I was interested in trying to make a rough estimate of how many bricks there were in the original build – I’m trying to picture them all coming by horse and cart ! I’ve returned to the question now and wonder whether you would be able to tell me whether the external walls are cavity walls or not? I.e. now I have estimated the size of them, should I double it ? The internal walls will remain a mystery but if I just get an idea about the outside it’ll be something.
All the best
Janet Gyford

Thanks Janet
My report listed all original fabric and advocated its retention. The HAMP team at Essex County Council (who oversee all Listed Building applications in the County) seemed quite on the case. Hopefully the conversion will thus leave most of the historic fabric intact.
Regards
Rob

Brushes used to be made at the Bridge Home. The man trained at Braintree. The Bridge Home ‘boys’ had all the equipment