“The activity of bathing in Britain for reasons of health and well-being, goes back earlier than the 18th century ….. and indeed to Roman times.”

This was written by Susan Kellerman in her fascinating article on “Bath Houses – an Introduction” (in number 1 of the “Follies Journal”, 2004). She found that the majority were built for the gentry, but that there were others for the servants, or for the general public.

There is another excellent article now, published in 2010 by Clare Hickman, entitled “Taking the Plunge: 18th-century bath houses and plunge pools”. https://www.buildingconservation.com/articles/bath-houses/bath-houses.htm

In spite of this research, it seems that hardly any bath houses survive today, and those that do, are not surprisingly the elaborate buildings of the wealthy. But it does seem that they would generally consist of a ‘house’, either large or small, for changing in, and a plunge pool of cold water adjoining.

The sites of two eighteenth century Bath Houses are known in Witham. One is the Vicar’s Bath House, not far from the Vicarage. The other is the Bath House of the Lord of the Manors of Witham and Newland, who at that time lived at the Grove. The first made use of small streams near the River Brain, whilst the second seems to have been actually in the river.

In 1749, the writer Horace Walpole had thought that the Witham vicarage, now the Old Vicarage, was ‘one of the most charming villas in England.’ And in a well-known phrase, he observed the ‘sweet meadows falling down a hill, and rising again on t’other side of the prettiest little winding stream you ever saw’.

The imposing Vicarage was probably built for Reverend George Sayer, who was Vicar of Witham for nearly forty years (1722 -1761). His wife, Martha, was a daughter of the Archbishop of Canterbury. He was extremely prosperous, and later the Essex historian Philip Morant wrote rather ambiguously that Sayer had “greatly (or rather extravagantly) beautified the Vicarage at Witham”.

Revd Sayer also gave attention to his garden and to his extensive glebeland, with the help of local landscape architect Philip Southcott. When the Vicar died in 1762, his successor, Revd Lilly Butler, ordered a map of all the land to be drawn  by Timothy Skynner.

Timothy made a very attractive job of it, and on his map he drew and named the Bath House, the first that we know of in Witham. (reproduced by courtesy of the Essex Record Office (ref. D/P 30/3/5).

I have not found the Bath House on any other map or document, so instead I have tried to indicate where it was. I’ve compiled  four small square maps, in date order, shown below. I have marked the approximate location of the Bath House in red on all of them, taking its location from the first, original map of 1762, which is shown at the top left. I’ve outlined the Bath field in the same way.

The other three maps show the same area in 1839, 1875 and the 1980s, i.e. one from the Tithe Map and two from the Ordnance Survey. To start with, the path is to the west of the Bath House, but on the fourth map it curves to its east.

In looking for the location of the Bath House now, we need to take the measurements from the original map, which may or may not be accurate. To find the spot now, you can start by coming out of the opening at the west corner of Chipping Dell, onto the River Walk (bottom left of the fourth map). Turn right and walk uphill along the River Walk  for about 70 yards, to near the quince trees. The path having moved eastward as shown on the last map, you’ll be looking on your left. The exact location on the ground is not really certain at the moment, there being several possible wet places. But further discoveries in future might make it more certain. It looks a bit like a building, but it’s hard to be sure, and it is only called a Bath on the map.

Below is the plan of the Vicar’s Bath House, enlarged from the 1762 map. 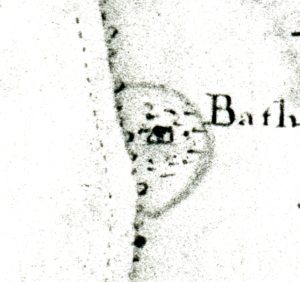 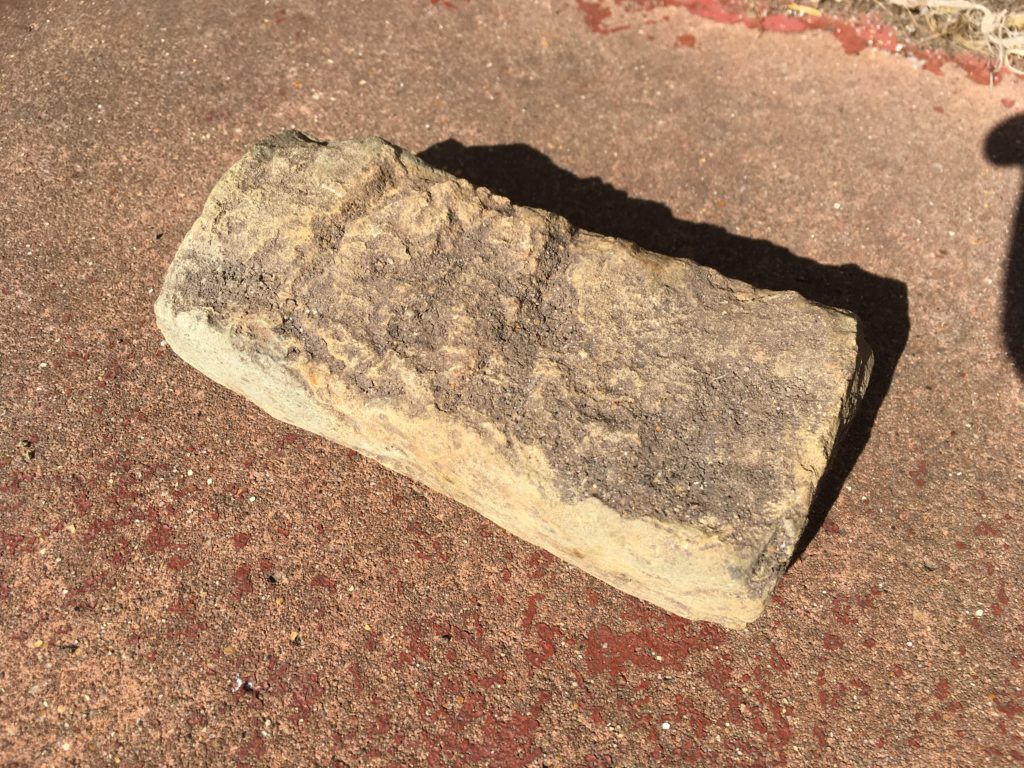 Above. A grey brick five and a quarter inches long,
found in 2005 by Ted Dersley, in or near the site of the Vicar’s Bath House.

To digress for a moment, further up the path is the ‘spring’, as we know it, nearly at the top of the Vicar’s land (nowadays near Ebenezer Close). In 1762 it was called a ‘cascade’ on the map. This was usually a fan-shaped arrangement, whereby water flowed slowly down to a central point, probably where the spring is now. If you stand on the path behind the spring, you can sense the shape of the fan sloping down.

This second Bath House was the property of the Lord of the Manors of Chipping and Witham. He was Thomas Kynaston, who had moved to Witham  from Grosvenor Square in London in about 1786. He came to the Grove, a large mansion on the main road through Witham (it wasn’t the actual manor house, there wasn’t one as such – many of the other lords lived outside Witham even though they owned the manor and its belongings).

His bath was actually on the river, but quite some distance from his house at the Grove. The document which shows us the bath, concerns the purchase of a strip of land, and the setting out of a path along it, to make it easier for him to get there.

Below is a transcript of the document that introduces us to the Bath in 1791 (Reproduced by courtesy of the Essex Record Office, i.e. D/DDc T83).

“This Indenture made the eleventh of July …[1791] Between Thomas Isaac of Witham … Gentleman of the one part, and Thomas Kynaston of Witham aforesaid esquire. of the other part,

All that piece or parcel of freehold land or ground containing in length from the Gate at the Letter H in the plan hereunder drawn to the Letter A one hundred and sixty five feet, and in width for the space of one hundred and fifty seven feet thereof from the intended fence at the letter G to the letter F, including the Ditch next the Garden in the occupation of William Wade eight feet, and for the remaining part thereof fifteen feet in width near the river 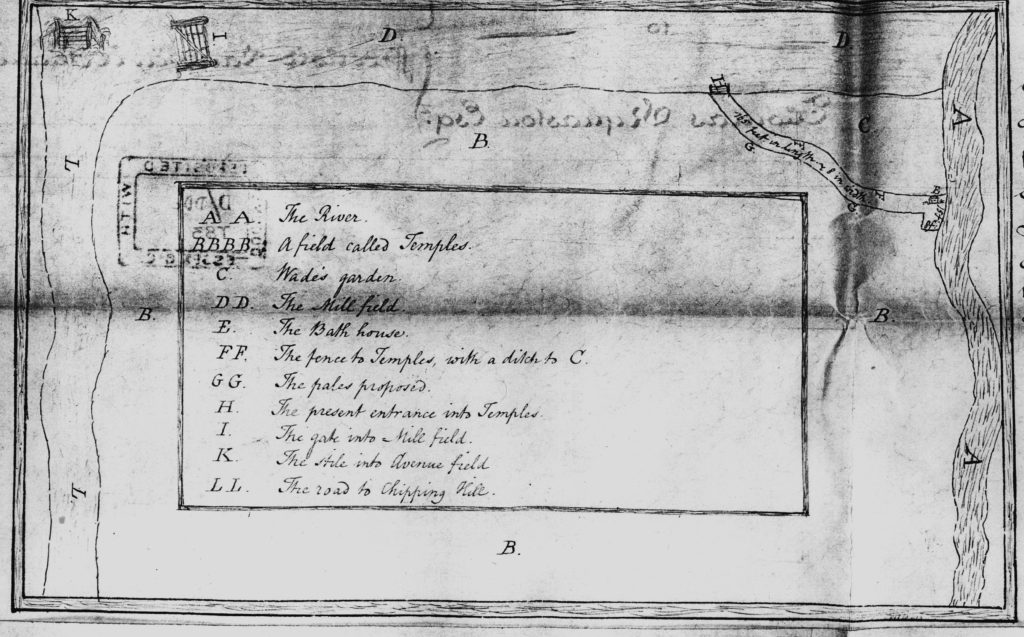 Above is a copy of the accompanying map, which includes the letters quoted in the document to describe where everything was. The new path, and the Bath House on the river bank, are at the top right.

Below is a set of four maps at different dates, like the ones given earlier for the other site, with the first known location of the Bath House shown as a blue oval on each.  The course of the river has been altered over the years which is confusing. and the ground next to the road has probably been built up, making it hard to be exact. So more research would be welcome. But followed through to the present day, the sequence suggests that this Bath House was located somewhere near to what is now the top of Armond Road. There is an extensive overgrown area there, leading down to the river. 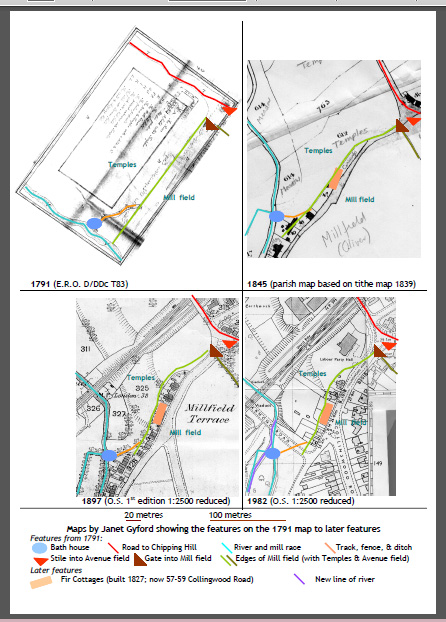 And finally, a close-up of the Lord of the Manor’s Bath House taken from the first map, and rotated so that it is seen roughly north-south. The bath building (E) stands next to the rather fierce-looking River Brain, and the new path arriving beside it from the north it definitely looks likr a building, a house. 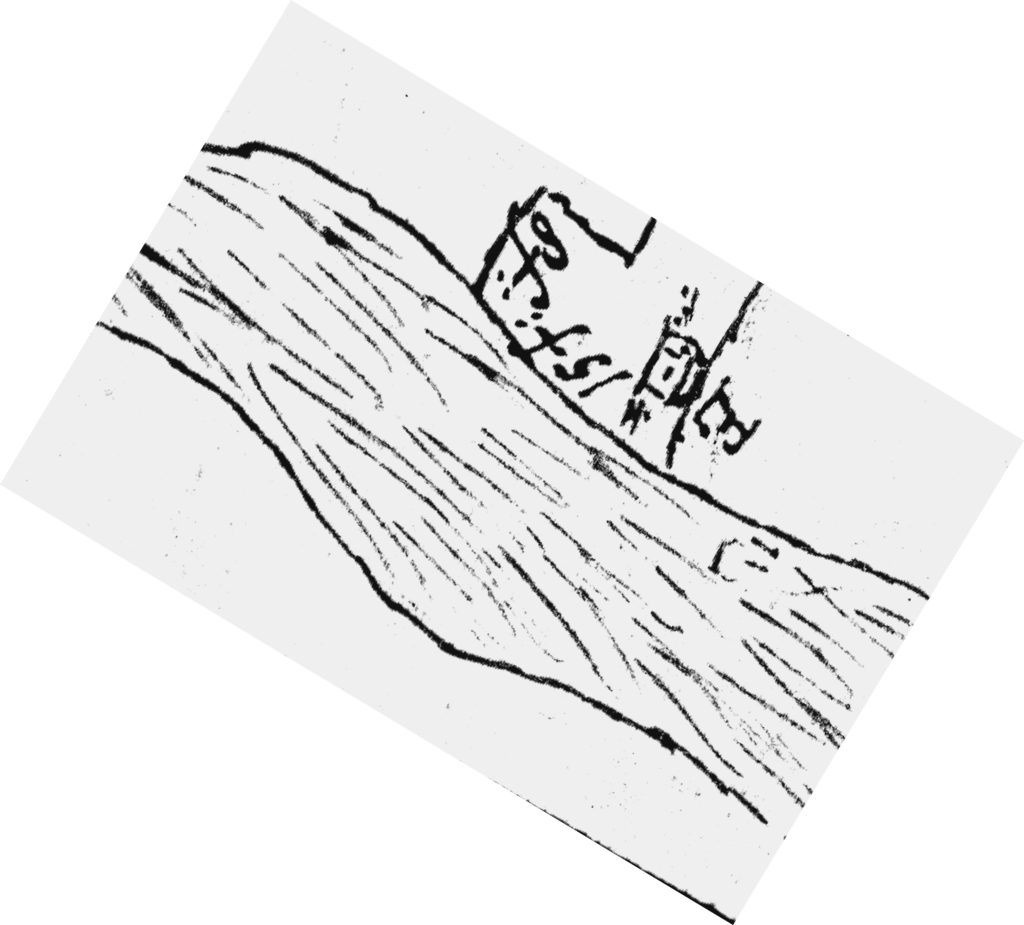