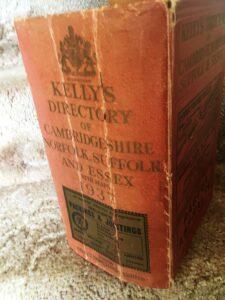 The two photos show some of the historical directories for Essex. The big one dates from 1937, and, as you see, it covers four counties. Usually Essex had its own separate volumes, like the ones lying down in the photo further down.

Some readers will be asking “What’s a directory?” Sometimes the term “Trade Directory” was used, because much of the content related to business. Or “Kelly’s directory”, named after the firm that published many of them. Or “historical directory” by modern users.

The photocopies below illustrate the contents of a directory. They show the Witham section of the 1874 volume. Tap one of them once or twice to see it larger. Looking at these should help to show you what a directory is. They followed a very similar form for years.

Essex directories are available for various years from 1793 to 1937 (not continuous years). For each parish they list the tradesmen and women, and also the better-off residents.

So I’ve taken the entries for Witham for thirty different years, and combined them in alphabetical order. This could help family or local historians if they are looking for someone in particular. But other people may enjoy just browsing, as I do, and seeing where people lived and what they did. For instance, as shown below, following each other in the “A”s, there are a watch and clock maker (1848), a bookseller (1793), a straw hat maker (1848), and a fried fish dealer (1929).

This fish dealer, Frank Allen, is said in the directory to have been located at 10 Church Street in 1929. This is lucky for us, because street numbers were quite new then. And lucky again, that it is the same address as today’s excellent chip shop, Pop In.

So fish and chip loving customers must have been going to that same place ever since 1929 or earlier. Even though the business changed hands from time to time. What’s more, in 1955 the whole shop was pulled down, together with its neighbours. It was then incorporated into today’s small shopping centre, which was described at the time as being built in a “medieval” style, with “gables and panelled plaster.”

But this upheaval has not stopped the fish and chip sellers and their customers at 10 Church Street. Some people will remember Mr Stibbs, who came in about 1960. Or even “Frenchies Fish Bar” before him (information from Margaret Brannan – thank you Margaret).

This chat about fish and chips was a completely unplanned diversion, sorry. But it does show what can happen if you look at a directory and let your mind wander.

As I have merged all the Witham names in  the thirty volumes,  those names all appear in the table accompanying this article. So, in the table you will be able to find any of the thousands of people who lived in Witham between 1793 and 1937, and who were mentioned individually in a directory. This would mean that they either had a trade or business, or that they were quite prominent members of society. Some people would have many entries over a period of years, whilst other people had just one. I haven’t included the separate sections for schools, public bodies, etc.

The impressive table was designed by Phil Gyford (thank you Phil). To get to the table and the names, see the first of the notes below. 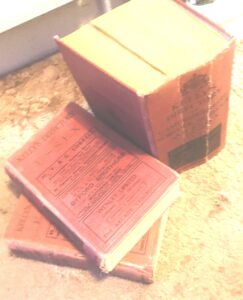 (1) Finding the names.
I hope that this first note will help you get to the page with your names on, if you are not already there.
Either:
(a) type  the surname you are looking for into a search box anywhere in the website. For instance, if you search for Gimson , the search results will include “People in Witham Directories – 1793 to 1937: G“. If you click on that, you will go straight to the section of the table with all the “G”s.
Or (b), go to the blue alphabet at the top or bottom of this section, click on the initial letter of the surname, and you’ll see all the entries starting with that same letter.

(3) There were usually two sections in the original directories, one named Commercial and the other named Private Residents. This is illustrated by the 1874 photocopy above. If a person came from the Commercial section, they will have a trade or business after their name in the table. The Private Residents would have a residence, (or, occasionally, a blank). A few prominent people were included in both sections.

(4) Street numbering was not introduced in Witham until 1922. Many of the numbers from that year are still the same today. But even after that, some of the bigger houses only had names.

In this website I often use a street number to identify a building, even if I am writing about a time before its number came into use.

Note that these street numbers bore no relationship to the numbers used in the census returns. Something to beware of even today.

(5) High Street and Newland Street are the same street, High Street being a ‘nickname’. The directories seem to have used “High Street” most of the time.

(6) Brackets –  I have used square brackets to enclose something I have inserted myself. For instance, when Queen Street appears, I put [Lockram Lane], its modern name, in square brackets afterwards. (The name Queen Street was used for a time because it was more respectable, but it didn’t last).

(7) Telephones did not arrive in Witham until 1904, and for many years only a very few people had their own, mostly businesses. So not many phone numbers appear in the directories discussed above (usually described as TN). There was one phone at the Post Office for public use. There were telephone directories in addition to the main directories, but for a long time they were very brief.

(8) This has all seemed quite complicated to set out, so if you come across anything that is wrong or unclear, do please let me know.