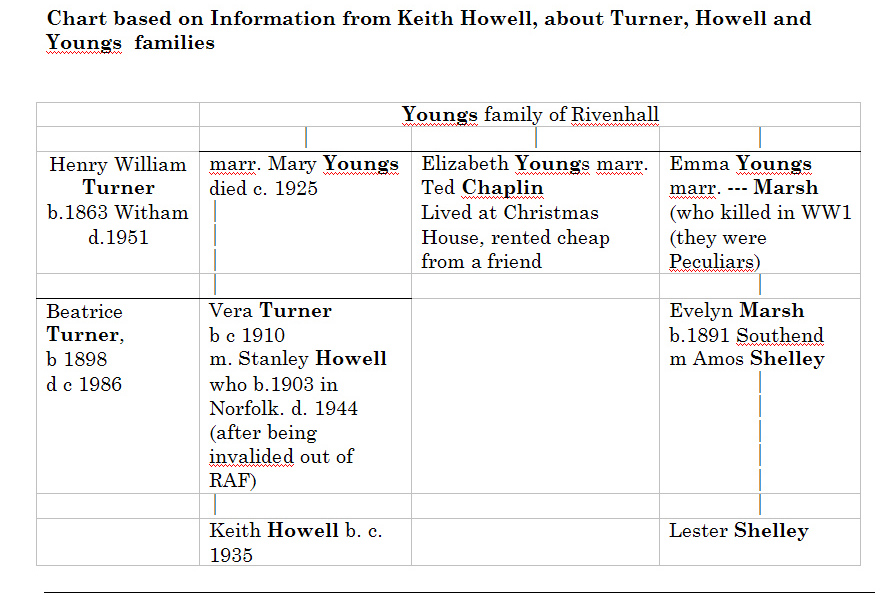 Parents
Father Henry William Turner from Witham, brought up in cottage near church. Monumental mason, worked for Slythe when Mrs H a child. Also made and mended cane chairs at home. Lived to age of 90, she said he died in about 1942 but judging from his age compared to the census, and also the 1947 electoral register, perhaps it was 1952.3
Mother Mary Ann from Rivenhall, maiden name Young. Sister of mother of Mrs Evelyn Shelley of Rex Mott Court. Before marriage did nannying and travelled abroad with the family. After marriage did a bit of catering with aunt, Mrs Chaplin, e.g. for Hunt Balls Also took in lodgers. Died c 1916 aged 56.

Siblings.
One sister 11 years older, went nursing in London. Another girl Elsie unofficially adopted at the age of about seven when Vera was nine.

School
Board School in Maldon Road.

Husband Married in All Saints church. Stanley died after about nine years’ marriage. He was in the wholesale tobacco trade.

Residences
Maldon Road till about age seven. Then into house in Newland Street, [site of 102-116].
When first married, lived in bungalow in Hatfield Peverel. Then to Newland Street near Co-op. Than after a year to Braintree Road. Then bought house in Highfields Road. Then into Albert Road some time after husband died. Then to 23 Podsbrook
Also during Second World War to sister in Hampshire and then to husband’s aunt and uncle in Runcorn in Cheshire to be near husband in Air Force, then to Harden near Chester.

Jobs
Left school at 14, then after a year or so at home, when as apprentice in Co-op drapery for a three years.
Then to work in Chelmsford for Denny till married.
During Second World War, worked in Food Office in Runcorn in Cheshire part of the time.
After husband died, helping at National School, eventually in charge of the meals service.
Later when children were away at school, worked for Rippon’s tobacco wholesalers at 61 Newland Street, doing office work.
Then Rippon’s moved to Chelmsford and she worked at Templars School for two years at dinner times.
Then to shop in Braintree Road.

Children Keith and Hilary (daughter). Went to Masonic boarding school because their father had been a Mason before he died.

1930 electoral register
Henry William Turner, 104 Newland Street.
Stanley Howell, 98 Newland Street. No Vera but a number of other people with the same address.