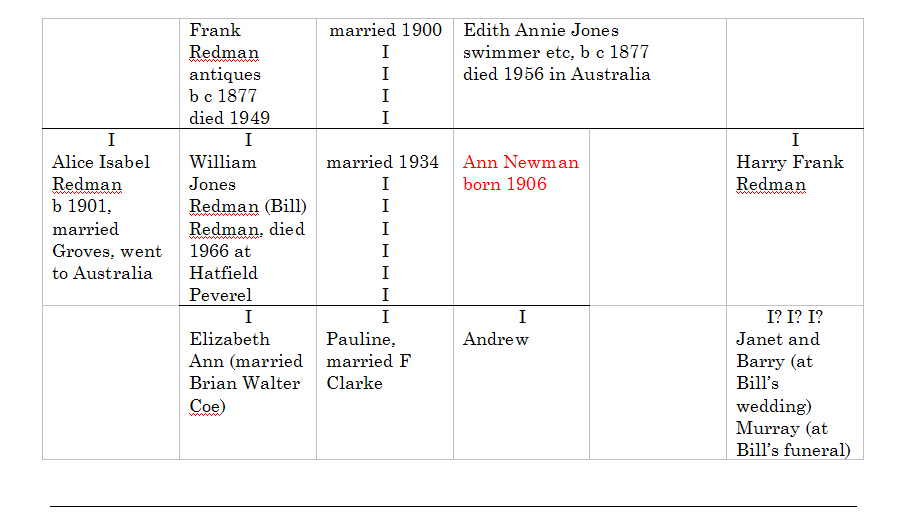 Born 1906
Father Mr John William Newman came from Hatfield Peverel when he was eleven, and his parents started dairy at Croft House, Bridge Street. Sold business probably to Co-op after the War. Father died in 1972 aged 94. Golden wedding when lived at Ardleigh. Diamond wedding when at Oaklands, 37 Chipping Hill.
Uncles – two in London, one a printer and one a tailor with his own business.
Mother Elizabeth Fleuty, born in one of 23-27 Bridge Street, Fleuty wheelwright’s family (brother of her father or grandfather was killed by falling into the saw pit). As a girl worked as a nanny in Hampstead with a Jewish family. Later in Springfield with a Dr Gimson’s baby (Dr Dudley G = brother of the two Witham Dr Gs) The Gimson baby was later Brigadier Gimson of Braxted. ‘Mother’s people’ lived in Braintree Road at one time when Ann young. Mother died at age of 87
Siblings
Brother Bob 18 months younger than her, went into family dairy business, and younger brother Eric, four years younger, became a chemist. Sister three years older.
School
National School, Guithavon Street till twelve, then Chelmsford High School till seventeen.
Residence
Brought up in  House, 10 Bridge Street, Newman’s dairy.
When first married in 1934, lived over the antique shop at 37 Newland Street for about 18 months.
Then in Hatfield Peverel with new shop till Second World War. Then to mother in the Ark, Guithavon Road, while husband in the forces.
To Norfolk House, Highfields Road by 1946.
To 37 The Avenue by the time of the interview in 1983.
Work
Telephone exchange at Post Office when left school at 17. Became supervisor when the previous supervisor left. In charge of two girls.
Married
1934. William Jones Redman, son of Frank.
Children
Elizabeth, born 1939, Pauline born 1944, Andrew Redman born 1946 (latter lived in Danbury in 1983)

Newspaper cutting 28 September 1956 (probably Braintree and Witham Times), in Lucy Croxall’s scrapbooks, vol 3, now ERO Accession A10690.
Mrs Edith Redman dies in Australia.
A Witham resident for 21 years, Mrs Edith Redman died at the home of her daughter Isabel at Safety Bay, Fremantle, West Australia, on Sunday. She was 79.
Well known and liked, Mrs Redman was born at Upwell, near Downham Market, and came of parents of well known Fen farming stock. She came to live in Witham with her husband and family, daughter Alice Isabel and two sons William J and Harry Frank, in January 1929.
A year after her husband’s death, in November 1950, Mrs Redman went to Australia to live with her daughter and except for a visit of six months in England in 1953 she had been there ever since.
A regular church attendant and a member of the British Women’s Institute, she did not relax this on leaving the country for she had attended meetings of its counterpart in Australia.
And another hobby not relaxed was that of swimming. Although she was over 40 when she first learned to swim, age did not deter her for she believed salt water to be healthy, and last season, she informed her family at Christmas she had had about a dozen swims in Safety Bay.
An enthusiastic cyclist, she cycled until advised to give it up when over 70. She was given a new bicycle for her 70th birthday. When at home Mrs Redman, although well over 60 years old, would cycle to Maldon, have a swim and cycle back again. Another hobby continued was her knitting. She was a very keen knitter and in 1953 it was estimated that she had knitted over 1,000 pairs of gloves. Only one of her wishes remains unfulfilled – to return again to England.

Newspaper cuttings 12 August 1966 (probably Braintree and Witham Times), in Lucy Croxall’s scrapbooks, vol 5, now ERO Accession A10690.
Antique dealer dies. A director of Redman and Hales, antique dealers, died suddenly last Thursday after he collapsed in his bedroom.
He was 64-year-old Mr William James Redman, of ‘Oaklands’, Hatfield Peverel, who was in charge of the company’s antique shop in Hatfield Peverel.
Mr Redman was found in a collapsed condition by his wife in the early hours of the morning.
The Coroner for Essex has been informed of his death.
The funeral was held at Hatfield Peverel yesterday.

Conversation with Mrs Ann Redman, 124 Newlands Court, Newland Street
12 September 2001
Since she left The Avenue she has lived in several flats, Millvale Lodge, Foster Court and this one. She wanted to find one where some of the other residents played cards, especially bridge !
Her husband, Bill (included on photo M1019) was very keen on sport. As well as football he played a lot of tennis. Later he took up golf when she persuaded him that he was getting a bit old for tennis.

Looking at various photos of pageants etc., she said that some of these sort of events were at the Grove where there were trees all round, and some in the Recreation ground. Mr Quick (head of the Maldon Road school) organised pageants. Miss Maisey, dancing teacher, organised the children especially.
About going to Chelmsford High School. Joyce and Zena Sorrell were younger than her and she was about 17 when they went to the school, and she was supposed to look after them. They were ‘terrors’ !  Ruth Peecock (only child, daughter of bank manager and wife), was said to be delicate so she had an Ottley’s cab to the station so she was always cold, whilst the rest of them ran and were warm. Mrs R only missed the train once and was told off at school. But you never answered back.

Mrs Redman’s mother, Mrs Newman, did all sorts to do with the Church. She ran the Sunday school at Church House for 25 years.
Marjorie Brown (later Mrs Coleman) used to put on a review about once a year for the ‘Witham Imps’, made up of the Young Conservatives, when teenagers – ‘we were all young Conservatives in those days’. There was another group when they were older and at work; they called themselves the Gluepots because they stuck together. They had outings and dances. Once they planned a dance on Sunday afternoon and their parents were horrified and they couldn’t have it. Once they went to a boat moored at Tollesbury for a party.

Information from Mrs Anne Redman (nee Newman), October 2001
About Mrs Edith Redman (Anne’s mother in law)
She is on photos M610 and M611 in the swimming pool behind the Swan (open 1933-1936). She weighed 13½ stones. She learned to swim in the pool at the age of 54 and had a certificate of merit for swimming a certain number of yards. She was so keen she used to cycle to Maldon to swim in the pool there.
About Mr Frank Redman (Anne’s father in law)
Had the antique shop at 37 Newland Street. For a time they lived over the shop there ‘in a nice 2-bedroomed flat which had lovely big curved windows, overlooking the High Street’. They moved out to Evelyn House which was at 35 Newland Street, ‘the whole width of Woolworths, with a lovely walled garden at rear, a mass of tulips’. It was rebuilt and concreted when Woolworths was built.
About Mrs Anne Redman and Bill Redman (Bill was son of Frank and Edith)
They married in 1934 and lived in the flat at 37 briefly after the parents had moved out.

Email from Angela Ward nee Coe Email 29 April 2002
‘I am daughter of Elizabeth Anne Coe nee Redman and Brian Walter Coe, Elizabeth being Anne Redman’s oldest child. .. I was born in Chelmsford, raised in Hertfordshire, married in Buckinghamshire. and now live near Bristol with my husband and four children. [27 Lincoln Close, Keynsham, Bristol, BS31 2:J. email award@blueyonder.co.uk.]
We exchanged info after that.

Email from Tracey Dowe, 30 March 2005, printed copy sent me by Kathy Tearle
Dear Mrs Tearle, My name is Tracey Dowe. I am emailing from Australia. I am the great-granddaughter of Mr Frank Redman. he and his sons owned the building at 37 Newland Street Witham. I have a newspaper clipping from 2 July 1959. It talks about the building may be demolished. I have been looking for more info about it but haven’t been able to find out anything. I was wondering if you or any one at the paper would know anything about it. I am also trying to track down any descendants from him. My grandmother was his daughter Alice Isabel Groves (nee Redman). I hope you can help me. Regards. Tracey Dowe.

Email to Tracey Dowe, 2 April 2005
Hello Tracey
Your enquiry about the Redman family in Witham has been passed on to me, because I have a lot of information about Witham history.
I’m attaching a photo of the shop you mention, at 37 Newland Street, taken in 1958 when it was empty. It was demolished some time after that, I am not sure exactly when.[photo M421]
As I understand it, Frank and Edith Redman went there in the 1920s. Their sons Bill and Harry (Alice’s brothers) took over, but then Bill went off to the neighbouring village of Hatfield Peverel to set up a separate business. In more recent years Bill’s widow Ann lived in Witham; she died two years ago.
I have various other snippets of information including the following from a local newspaper dated 28 September 1956, when Edith died: … [quote from newspaper report]
After Ann died, a relative did get in touch with me, and I have sent her your email address in case she is interested in contacting you.
I hope this helps. All the best Janet
[I also emailed Angela Ward about Tracey, see below]

Angela Ward nee Coe, email 3 April 2005 in reply to mine
From: “Angela & Neil Ward” <award@blueyonder.co.uk>
To: “Janet Gyford” <janet@gyford.com>
Subject: RE: redman family
Date: Sun, 3 Apr 2005 21:25:55 +0100
Hello Janet
Thank you for the email- I have emailed Tracey to see if she would like to
correspond.
Well unfortunately I haven’t got very far with the scanning in of photos etc
that my Grannie left me – never enough time.
What I do now have is the remaining diaries that she wrote as well as one
from 1937 from my great grandmother – Elizabeth Ann Newman nee Fleuty. My
mother recently emigrated to Spain and gave me a bag full. I am extremely
slowly typing them up.
Anyway I will let you have copies of stuff when I have done it.
Many thanks again for getting in touch about Tracey – especially pleased as
I have had no contact with the Australian branch.
Best wishes
Angela

Tracey Dowe, email 15 April in reply to mine
From: “Mark & Tracey Dowe” <mtdowe@netspace.net.au>
To: “Janet Gyford (E-mail)” <janet@gyford.com>
Subject: Thank you
Date: Fri, 15 Apr 2005 08:57:02 +1000
Hi Janet,
Thank you very much for all the help and info that you have given me. I was
sad to hear that the shop was demolished but I guess that is progress.
Thank you for the photo and for the info about my Nan. Thank you for all
the time you have put in for me. If you ever come to Tasmania you are very
welcome to stay with us here.
Again thanks
Tracey Dowe