This a list of a some of the places in Witham which I think might be of particular interest to archaeologists in future.

But absolutely anywhere might have traces of the past underground. So absolutely any new building work or rebuilding needs to be examined.

This is probably the best-known archaeological feature of Witham .
(see:

There have been a few archaeological investigations there, and various maps drawn and notes made. The ‘biggest’ discoveries physically have been the iron-age “pokers” found when the railway was being constructed in the 1840s.

From the Iron Age and Saxon periods, it is perhaps unlikely that many solid items like the “pokers” remain. But I would hope that in the future, new archaeological techniques might reveal some more fragmentary items, even some that are practically invisible, but neverthess interesting.

This means that any place, whether on or in the earth banks themselves, or within the whole area bounded by them, might be revealing. In particular, the areas of the house called the Grange, and the Railway pub (formerly the Albert) are potentially significant. There is evidence that that was where the ‘headquarters’ of the Saxon establishment were situated.

55 Chipping Hill and its surroundings

This is a copy of a letter that I sent on 1st March 1983 to the County Archaeologist.

Earlier this week I talked to David Smith, of 25 Church Street, Witham. He works for the Gas Board, and some weeks ago helped to dig a trench for them along Chipping Hill, Witham.

I thought you might be interested to know that he described finding the end of a stone wall under the road, somewhere near 55 Chipping Hill and apparently leading towards the edge of that building. He also said that in one area near the churchyard there was a marked change of soil and a quantity of animal bones; this may have been in Church Street.

I have never heard of anything which might explain either of these phenomenon.

Reply from Mike Eddy, 21 March 1983, saying the info had been put on the Sites and Monuments Record.

Since I first wrote that, I’ve discovered a photo taken in the back garden of that same house at 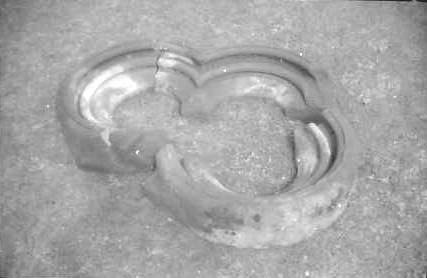 number 55 in about 1966 by Harry Loring. It shows a round stone object, looking rather as if it was from a church. I can remember hearing about it now, but I didn’t hear much, and I don’t know whether there any relevant records surviving. The second photo  shows the  garden where the object was found (harry loring 16A 32 and 33) 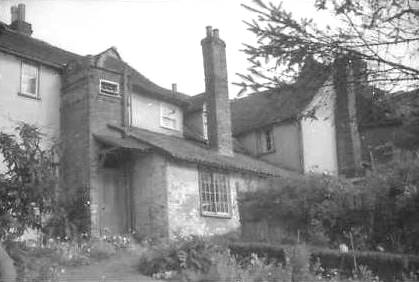 The bottom of Church Street, near the back of 18 Chipping Hill

Like the Chipping Hill site, this was revealed by diggings for gas pipes. I have a clear memory standing in Church Street, nearly at the bottom end, and looking down on a spread of red bricks, as if there had once been a building there. This is a complicated junction, and it is quite possible that some of the roads and buildings were in a different place in the past.

The Spa, near Powershall End and Flora Road.

The Spa was active in the early 18th century. There are some clues as to the whereabouts of some of the buildings. There may be other clues that we don’t know about.

In particular, the outlines of two large buildings have been detected here by dowsing.

The Spa at Witham

The main road through Witham.

In a number of places along that length and beyond, outside of Witham. traces of the Roman roadway have been found.

But there is no known physical trace of Roman road within Witham. In spite of the fact that it is invariably entitled “Roman Road”.

It is not enough to assume that the road ran in a series of straight lines – for instance at one place in Kelvedon, a definite twist in the road was found when it was excavated.

In Witham long stretches of the road have been built on, some very  recently. But as far as we know, the Roman road has not revealed itself. It could presumably be identified by its structure and the type of the stones.

So that is something to be watched out for. The first step should perhaps be to increase awareness of what roadway there might be and where.  And not to assume it will all be in a straight line. It may be that the west end of town might be the most productive, both for finding the road and for finding other Roman remains, because of its proximity to the Roman temple and other finds at Ivy Chimneys. Even just this part covers a big area, and a constant state of awareness, is needed in order to notice what relevant proposals are being made.

I once suggested to a local pofessional archaeologist that the site of a new building at that end of town, quite near the road, might have revealed something Roman. They couldn’t believe that they hadn’t thought of it themselves, and then it was too late.

The windmill was situated at the endd of what is now Tudor Close. A report in the Chelmsford Chronicle in 1819 said it was  “new built” and was a “Tower windmill”with “two pair of French stones, with the Going Gears and Machinery, complete”. A later edition called it a “smock windmill”. The latest reference I found was in 1847 in a rate book.

This site has been mostly been built on now, in about the 1970s,and I don’t think there were any reports of findings during the building work, though something must have shown up. But it would a pity if it was forgotten.

I read a recent report about the excavation of a  prehistoric site in Witham and Rivenhall, which had WW1 practice trenches in the corner. The archaeologists had looked at the trenches on the grounds that the First World War might become fashionable one day.

I think that day may already have arrived. Soldiers from the Midlands and Scotland were billeted in Witham in great numbers, so there might be traces of them virtually anywhere. But I would like to think that those practice trenches would be given a closer look one day, and also the shooting ranges over towards Faulkbourne. Several people described them in the Interviews which are a category in this website, particularly Walter Peirce, who also watched the making of the carving on Chipping Hill Bridge in 1915 by two soldiers. To end, I feel that more could be done to make the carving known, perhaps by producing copies to be displayed elsewhere. See: